An unconventional family reunion took place in Niagara Falls this week where eight “diblings” – donor-conceived siblings – and their mothers met up to begin what the families hope will be a lifelong friendship.

Single mom Kenyea Jones, 44, is one of the mothers who attended the joyful gathering. 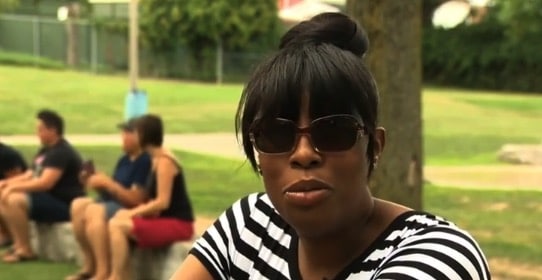 “I’ve always wanted to be a mom,” said Jones. “I knew it was going to happen, but it didn’t matter to me if it was through adoption or if I gave birth to a child.”

Jones chose to use a sperm donor and in vitro fertilization, which led to the birth of her son, Presley, now 20 months old.

The sperm bank Jones used allows its clients to connect with other families who have children from the same sperm donor through a closed website. Thanks to this opportunity, Jones was able to find five other mothers online.

After sharing photos and stories about their seven children, the women decided to get the kids together for a weekend in Niagara Falls.

“We are going for a diblings reunion,” Jones told local media. “I want to make sure that [Presley] knows where he came from, the process, and the siblings that he has and so they can all become lifelong friends.”

Holly Brown and her partner Annette Jaszko also attended the meet-up, explaining they wanted their son, two-year old Griffin, to meet as many of his 17 diblings as possible.

“I said, ‘Can you tell me how many other live births were from this donor?’,” Brown recalled. “It was kind of curious, I was scared to get the answer because, again, this is not part of how I imagined this was going to be, that there would be other live people, real people that we would be connecting with. And she said ‘There are 17 other births.’ Eighteen, you know, Griffin makes 18. And I was at work and I almost dropped the phone. I couldn’t believe it.”

Other moms were less enthusiastic about the idea of meeting at first. Nathalie Vallee and her partner Jennifer Havens have two children from the same donor, Emmett, 2, and Maggie, 5 months old.

“It was so new – you knew there [are] other kids out there that have the same donor,” Vallee said. “But you kind of just want to not think about it. But then we kind of warmed up to the idea when we saw the pictures of the kids and the conversations, and it just kind of came about.”

One thing the moms all have in common is a desire to find similarities among the diblings. Even before meeting, they discovered all of the children were very social. 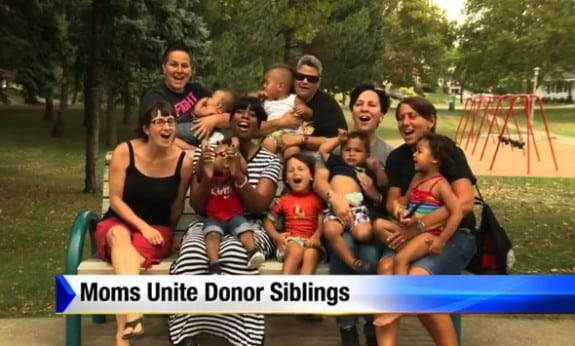 “We just talk about their personalities, watching them grow and develop and just trying to see if they have the same eyes, the same nose, the same type of personality, and just getting to learn more about them,” Jones said. “So far, I’ve seen the hair color, the eyes. It’s funny because they’re all at that age they have a little ‘no no no’ stage, a little tantrum stage, and they all sound the same. I was like, ‘Oh, Presley does that, so I’m glad to see I’m not the only one.’ ”

“I thought it was cool just to see that they really looked alike,” Vallee added. “For me it was just nice to see their faces. To see, OK, that’s true, that’s- what feature of Emmett is actually from the donor.”

Even grandmas are getting on-board with the dibling reunion. Presley’s grandmother, Dorothy Jones, hopes the diblings will establish close relationships, despite living in different parts of the country.

“When I see him playing with those other kids and he’s running and jumping, it’s like they’re all friends,” she said. “They’re going to be all friends and hopefully as they grow, we can see them grow and they can communicate with each other.”