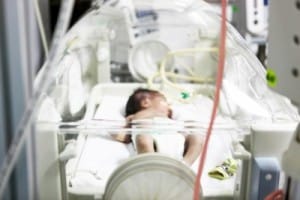 It is known that babies inside the womb can hear their mom’s voice and even respond to her rhythmic heartbeat. But now new research shows that a mother’s soothing voice can also help preemies grow healthier faster even as the equipment around them helps to stabilize their condition.

Amir Lahav, ScD, PhD, director of the Neonatal Research Lab at Brigham and Women’s Hospital (BWH) found that when preterm infants were exposed to audio recording of mom’s heartbeat and her voice, it lowered the incidence of cardiorespiratory incidents in these babies.

The research has been published in the Journal of Maternal-Fetal and Neonatal Medicine and suggests that apart from the incubators and highly skilled caregivers present in the Neonatal Intensive care Units, a simple difference that could better the health conditions of the preterm babies was their mother’s voice.

“Our findings show that there may be a window of opportunity to improve the physiological health of these babies born prematurely using non-pharmalogical treatments, such as auditory stimulation,” said Lahav.

The researcher explained that because the babies who are born premature are underdeveloped, they have high risk of suffering from lung or heart dysfunction. These infants can suffer from serious conditions such as apnea where there is no breathing for more than 20 seconds and also bradycardia – periods of significantly slow heart rate.

The investigators wanted to find if, by listening to their mother’s voice and heartbeat, the incidents of cardiorespiratory events could be reduced. For this small study fourteen extremely premature infants born between 26 and 32 weeks were chosen. The infants were assigned to receive an auditory intervention of maternal sound stimulation (MSS), four times per day throughout their NICU hospitalization. These sounds were that of their own mother’s voice and heartbeat.

The researcher found that in these infants the incidents of cardiorespiratory problems were much lower than other babies. The difference was especially significant once the infants were 33 weeks gestation or older.

The researcher though agreed that the study was conducted on a small scale and to firmly confirm the findings more research needed to be done.

“Our findings are promising in showing that exposure to MSS could help preterm infants in the short-term by reducing cardiorespiratory events.  The results also suggest that there is a period of time when the infant’s auditory development is most intact that this intervention of MSS could be most impactful,” Lahav said. “However, given our small sample size of 14 infants, further research is needed to determine if this intervention could have an impact on the care and health of preterm infants.”

Knowing that babies do find mother’s voice soothing and protective, it may soon be one of the essential tools that can help preemies overcome the initial health hurdles of their life.