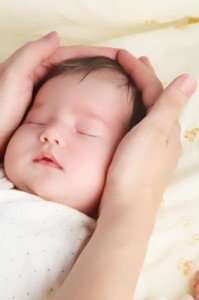 The “Back to Sleep” campaign – a campaign aimed at reducing the risk of SIDS by placing infants on their backs to sleep, rather than their tummies or sides- started back in 1994. Since that time, experts have noticed an increase in the number of U.S. infants with irregularly shaped heads. They say that this is a good thing, in the respect that it shows more infants are, indeed, sleeping on their backs, thereby decreasing the number of sudden infant deaths in America.

“There’s no doubt that as we, as a country, began putting babies to sleep on their backs, the incidence of [sudden infant death syndrome],” said Dr. Sherilyn Driscoll, director of pediatric rehabilitation medicine at the Mayo Clinic in Rochester, Minnesota.

Unfortunately, however, the increased back sleeping has created a different sort of problem.

All children with an irregularly shaped skull should be examined by their pediatrician, according to Driscoll, but in most cases, it is not an issue that requires immediate medical attention.

“There are few less-common conditions of greater concern, such as craniosyntosis, that can cause head-shape asymmetry, and those need to be ruled out first,” Driscoll said. But most cases of irregularly shaped heads are of little consequence and purely cosmetic. If treated early enough, positional plagiocephaly can be remedied, returning the head to a rounder shape.

One of the easiest ways to treat it is through repositioning, like supervised tummy time while baby is awake. Parents can also speak with a specialist about repositioning techniques in car seats or other commonly used infant holders (swings, bouncy seats, etc.). If that doesn’t work, helmeting therapy may be recommended by your baby’s doctor.

Parents should know that interventions are most effective when used between four and six months of age. After baby reaches a year, very minimal improvement, if any, can be achieved because the bones have already hardened and fused. Again, while a little odd-looking, it rarely leads to health consequences for the child.