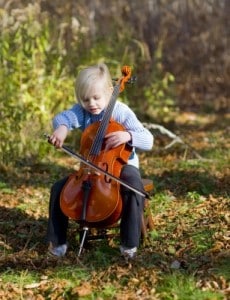 The evidence is mounting.  A new study, published in the journal Neuropsychology, indicates that learning to play music in childhood, translates into better mental acuity in old age.

In a statement, researcher and neurologist at the Emory University School of Medicine, Brenda Hanna-Pladdy, said,

“Musical activity throughout life may serve as a challenging cognitive exercise, making your brain fitter and more capable of accommodating the challenges of aging.  Since studying an instrument requires years of practice and learning, it may create alternate connections in the brain that could compensate for cognitive declines as we get older.”

This was a small study, with only 70 participants, but the findings seem to correlate with other studies that indicate the many benefits of early musical education.  Another recent study points to a correlation between early musical training and higher education.

Participants in this study were broken into three groups; those who had no musical training, those who had one to nine years of music education and those who had studied music for 10 year or more.

The musicians in the group had first picked up their instruments around the age of 10.  The participants ranged from 60- to 83-years of age.  None of the subjects showed signs of dementia and all were in the same relative state of health and had attained a similar level of education.

Each subject participated in a neuropsychological assessment which tested their verbal functioning, memory and attention.

“Based on previous research and our study results, we believe that both the years of musical participation and the age of acquisition are crucial,” said Hanna-Pladdy.

Whether the participant had pursued music through adulthood was found to be irrelevant.

More research is needed to confirm and expand on the findings.  The study’s researchers wrote that one of the possible explanations for their findings could be a propensity for intelligent people to study music for longer durations, making the experienced musicians group selective of individuals with higher I.Q.s.  – Jen R, Staff Writer