A UK couple is considering legal action against the NHS after a misdiagnosis by 20 of their doctors left their daughter without an ear.

When baby Isabel was born her mom Yvonne Bull noticed the infant had purple mark on the left side of her face. 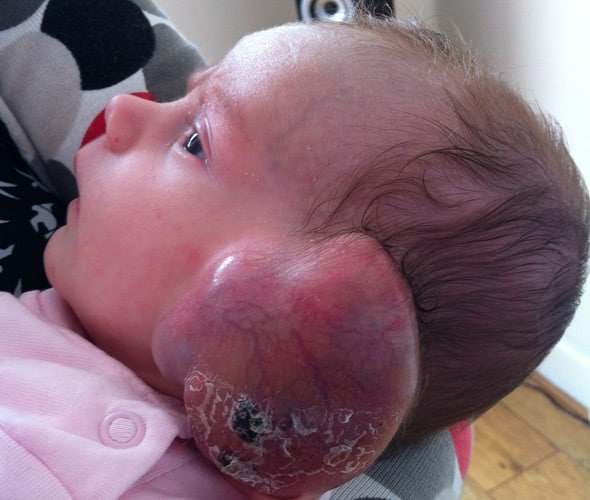 ‘When she was born they (doctors and nurses) brought the baby over and said “she has a small lump”,’ Ms Bull said.

‘I thought “that’s not a small lump, it is massive”. I was crying, I had never seen anything like it before. It was just ginormous. It was supposed to be a happy day but it wasn’t at all. They tried to reassure us and said it was a strawberry birthmark but it just did not look right.

‘We must have seen 20 doctors and they never questioned the original diagnosis, they just all said “it’s a birthmark” and told us not to worry.’

An hour after her arrival Isabel was taken for an ultrasound, but doctors said the mark was just a birthmark.

Not satisfied, Yvonne pushed for more tests and Isabel underwent an MRI scan at Southampton Hospital on March 6.

‘The doctor was really nonchalant and said “I bet on my life that it is a birthmark, I don’t want to see you for a year”.

‘We had to chase the results for about two to three weeks. Luckily, another doctor at the hospital saw them and we were referred to Great Ormond Street for a review.’

While waiting for their April 19th appointment Isabel’s tumor grew bigger, forcing her parents to return to the hospital where she stayed for 4 days. Doctors, however, continued to insist that the tumour was a birthmark and prescribed propanolol to shrink it.

When it ruptured during a bath on April 16th, Yvonne and her partner Anthony Roch rushed the baby to Poole Hospital and demanded she stay in for observation for the next three days until her appointment.

A biopsy performed later that day revealed the heartbreaking news that the baby had cancer and it had spread to her bone marrow.

On April 29th Isabel underwent a six-hour operation to remove the cancerous cells (and her ear) and she began chemotherapy on May 1.

‘To consider what she has gone through in such a short space of time, she is amazing, absolutely amazing.

‘She is an absolute pleasure to be around.’

Unfortunately, she may suffer from speech and language difficulties in the future.

‘We are very concerned to hear the family is unhappy with the care their daughter received, and would urge them to contact us directly so we can discuss these fully and answer any questions they may have.

‘We have a duty to protect our patients’ confidentiality and it would not be appropriate for us to comment further.’