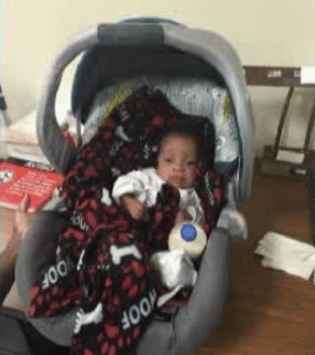 On October 22., Jeronde Jackson left her two-month-old son at a post office with no intention of returning for him. She has now been charged with abandoning her child.

According to KPRC Local 2, a customer spotted the baby alone in the lobby of the post office. That witness notified a postal employee of the baby, and the employee then notified a supervisor. The supervisor found the little boy, wide awake in his car seat, wearing a diaper with the word “Jesse” written on it. Another diaper, along with a container of milk, was found in the car seat as well.

After news reports containing photos of the child 2 were aired, the father, Glen Williams Sr., came forward to notify authorities that it was his child. The boy was then identified as Glen Williams Jr. Jeronde was then questioned by authorities regarding the reason she’d left her son at the post office.

Investigators say that Jeronde had been riding the bus with her baby to the post office. When she reached it, she said she was “fed up” and didn’t have any help so, rather than carry him any further, she decided to leave him there. She said she didn’t tell anyone that she had left him, but she felt as if she’d left him in a place that he could easily be found. And, although she stated that she did know there was a fire station just a few blocks away, she said she didn’t want to carry him any farther. She added that she never had any intentions of returning for him.

The little boy is not covered under the Safe Haven Law, otherwise known as the “Baby Moses” law in which parents who feel they are unable to care for a newborn are allowed to drop it off at a hospital, fire station, police station, or EMS station. This is because he is older than 60 days. In addition, he would have had to have been dropped off at one of the aforementioned locations.

It seems hard to empathize with a mother that has abandoned her baby, especially when, according to investigators, the mother seemed “nonchalant” with her responses, as if it wasn’t such a big deal. But there are a multitude of reasons that the mother may have chosen this path. Postpartum depression, for example.

Of course, we’ll never be certain, and, honestly, there is never a reason that “okays” such a decision, not when so many things could have gone wrong between when the mother left him and when he was found. We just hope that this little boy never has to worry about being left alone again.