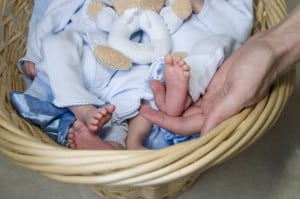 Six months into her pregnancy Fortunate Valkira was told by the nurses at the Hospital in Randjiesfontein, Midrand that she was larger than normal because her unborn baby was a large boy.

One month later, at 28 weeks gestation, Fortunate gave birth to twin boys during the night at her home in Randjiesfontein, Midrand. Fortunate remembers feeling very uncomfortable during the night, but does not recall feeling any pain. She thought that a bath would allow her to relax. After her bath she got out of the tub, dried herself off, and prepared to put her clothes back on when out of no where she felt as if something dropped out of her. She looked down at the bunched up towel of the bathroom floor and saw her baby.

“The baby landed on the towel on the floor. I started screaming and then the lady I live with came to help. Then I felt there was another baby”.

Siobhan Thorne, Fortunate’s roommate, came running when she heard her screaming. As she got to the bathroom door she saw Fortunate on the floor clutching a newborn baby in her arms.

“I thought the baby was dead. He just looked so small and she was only seven months pregnant. I started telling her (Fortunate) I was sorry about the baby when she said there was another baby coming”.

Siobhan took the first baby from Fortunate and placed him out of harms way while she assisted her with the delivery of the second baby. When she heard the first baby make a sound gasping for air, she immediately turned her attention back to the first baby and held him upside down in order to help clear the mucus out of his nose and throat. Once he was breathing she wrapped him in a blanket and returned to Fortunate to assist in the deliver her second child.

“I put him on my lap and then help with the second baby. But that wasn’t going so easily because the baby was breech and his feet were coming out first. “

Siobhan recalls that when the second baby was finally born he was blue and was not breathing. Thinking back to her CPR training she had she managed to get the second child breathing and cut both umbilical cords.

“A sister at Health-WorX told me how to do CPR. My husband died in a car accident last year, and when I saw this baby I had flashbacks of his dying. I knew I couldn’t let this baby die”.

When the new mom and her babies arrived at the hospital nursing staff said the preemies were both ice cold.

Despite their eventful delivery, the twins, who weighed 1,020g and 960g,  are doing well.

“They have been given medication to help them breathe, as their lungs are still underdeveloped, but they are not on a ventilator. It looks like the bigger boy has a small cleft palate” Wendy Stenner, unit manager of the neonatal ICU ward told reporters

Now, as she stands over her babies, afraid to pick them up because they are so tiny, the new mom is shocked that she had two little miracles when one month earlier she was planning to just welcome one.

“I haven’t thought of names. I thought of only one, John. I only have clothes for one baby”.

The twins will more than likely have to stay in the hospital for 6-9 weeks, which will hopefully give her enough time to prepare to bring 2 babies home.