Home » Mother gives Birth to Twins on the way to Hospital 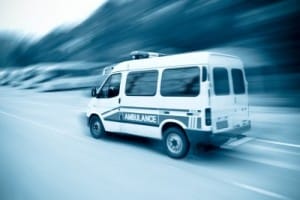 Amanda Knowles of Gloucester was due any minute on Tuesday when she called the city’s fire department for help. But while help arrived in time, the mom couldn’t make it to the hospital and delivered her twins in the ambulance.

24 year old Amanda was pregnant with twins and Tuesday afternoon when she began feeling uncomfortable, she called the fire department and a friend to take care of her 3 year old daughter.

Paramedics Linda Henry and Jeff Poole were in the ambulance which sped to the Beverly Hospital. But just a mile and a half away from the house, Amanda went into labor. The ambulance pulled over and called for backup on Route 128, near Exit 13 however, the first of the twins was already on his way.

Shane Michael was born that moment weighing 3 pounds and 12 ounces.

Firefighters Phil Bouchie and Tom Savage also had in the meantime arrived on the scene. One of them took charge of driving the ambulance while the other went inside to help the other paramedics. After Shane was delivered, they resumed their journey to the hospital. But the second baby could not wait either.

“Within 10 minutes I had another push and my daughter came out,” Amanda said of the birth of the second twin. “If I didn’t call them, I probably would have had them at my house in 15-20 minutes.”

Shaylea Marie was 4 pounds when she was born ten minutes later.

Although Amanda was scared, she says the emergency staff took very good care and handled the situation very well.

“Deliveries can be very very simple or they can be incredibly scary,” said Sander Schultz, a Gloucester Emergency Medical Services coordinate.

But he added that they were prepared for these emergencies and there have been previous occasions when mothers have not made it to the hospital in time to deliver there.

“We are very firm about our training standards,” he said.

Says Mary Beth, “It’s a good thing I didn’t give her a ride.”

Thankfully the twins are fine and will be home in a couple of weeks.