Just days after sharing the story of a father intentionally leaving his daughter behind in the car as he shopped inside of a Home Depot, we hear of a family that has been left heartbroken after accidentally forgetting about their infant inside the family’s SUV. 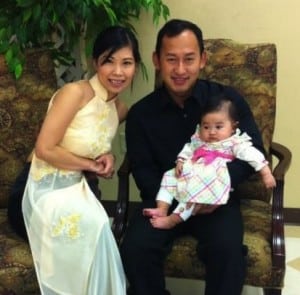 , knows that people are blaming her, disgusted with her, even. But what a lot of people don’t know is that no one could ever blame this mother anywhere near as much as she blames herself. And that guilt is a weight that she will carry with her forever.

“I want to tell everybody that I wish I was in that car seat, not her,” Katie told AL.com. “If I had to die for her to live, I would have done that.”

To the point of inconsolable, the mother shared what happened the day that her family was stricken with unimaginable sorrow.

Katie usually takes her daughter to a day care center before heading to the Genesis Nail Spa that her family owns. But that day, the 31-year-old mother had so much on her mind, she completely forgot about going to the sitter.

An employee that worked for the nail salon ha recently committed suicide.

A close family friend had recently had a stroke, and was in the hospital.

She and her husband were working on the plans for their daughter’s first birthday party, which would have taken place on Sunday.

Katie had this horrible feeling that something else bad was about to happen, but she never could have predicted that it would be something so preventable, yet so tragic.

“I had an uneasy feeling,” she said. “I told my mom I felt like something was going to happen.”

After visiting her husband at the nail salon, Katie continued on about her day, and headed off to work. It wasn’t until she’d received a call from her daughter’s sitter that reality sunk in.

When the sitter called, asking why Katie hadn’t brought Gabriella by, it was 1:15 in the afternoon. Katie had left and locked her car at 10:30 that morning. Frantic, she ran to her car, only to find her daughter’s limp little body, still strapped inside the car seat.

Chris Conn, who works at a fitness center nearby, rushed to help. He performed CPR, hoping upon all hope that his efforts would save the little girl’s life.

“Her body was radiating heat,” he told CBS42.

It was only 91 degrees outside, but by the time Katie reached her daughter, right around 1:30 that afternoon, the temperature inside the car had already reached 130 degrees. Gabriella’s body temperature registered at 105 degrees. She was rushed to a nearby hospital, but her mother hadn’t made it in time; Gabriella died at the hospital.

Losing their daughter has been painful, to say the least. But what makes it so much worse is the fact that Katie and her husband had tried so hard to have the beautiful little girl they called “Ella.” It had taken four years of trying, and a lot of prayers at their church.

“I asked God for this baby,” Katie said. “She was a gift from God.”

In fact, the couple was so overjoyed when they found out they were expecting their firstborn, they decided to name their daughter after the archangel Gabriel. And the birth inspired her father to open a seminary.

According to those that know them, the couple were doting and loving parents. They’re devout Christians. Their faith brought them their daughter, and Katie hopes that faith will help carry her through the loss of her as well.

Gabriella is the 21st child to die of heat stroke in a car this year. According to Jan Null, a certified consulting meteorologist at San Francisco State University, an average of 37 children die this very same way, each and every year. Out of the 582 children that have died since 1998, half were caused by caregivers forgetting the child, and only 18 percent of those cases were the result of the child being left behind intentionally.

The message is this: the majority of heatstroke deaths are accidents. We lead busy lives. We get distracted. We forget things. Lose things. And young children, when napping or quiet, can be forgotten. It sounds insane, unimaginable, and you may be certain that it will never happen to you. But I’m pretty sure that every parent who has forgotten their child had told themselves that at one time or another. Know how you can prevent heatstroke, how you can reduce the chances of forgetting your child, no matter how crazy life gets.

A few examples of how you can do this:

You don’t have to be a parent to prevent heatstroke either. If you are in a shopping center, a parking lot, at the doctor’s office, anywhere where parked cars are, and you see a child in a car alone, DO SOMETHING. Don’t keep walking. Don’t look the other way and assume it’s not your problem. Call the police, stay with the car, have another person contact someone inside the store, do whatever needs to be done to get the child out quickly. You could save a child’s life, and save yet another parent from the heartache that comes with the loss of a child.