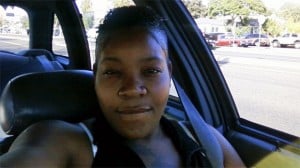 Texting and driving, alone, are dangerous. But how much more dangerous would it be if you were texting, driving and holding your infant in your lap? One mother recently made this very dangerous mistake and is now paying the price.

On Tuesday, another driver spotted Shawndeeia Bowen, 29, driving down the 405 freeway in California. Nothing unusual about that…but then the other driver noticed that Shawndeeia was texting while driving and that she had an infant sitting on her lap. Immediately, the other driver called the police, alerting them to the dangerous situation. The driver then followed the mother until police arrived.

Police finally caught up with Shawndeeia at Hawthorne and Torrence boulevards. When officers pulled her over, she still had the infant in her lap and the phone in her hand.

According to the police, Shawndeeia claimed that the baby had started crying while she was driving.

Unfortunately, that leaves no reasoning behind why Shawndeeia had decided to place her two-year-old son in an unsecured car seat or why her four-year-old daughter was sitting in the back seat with no safety restraint whatsoever.

What’s even scarier is the fact that this isn’t Shawndeeia’s first driving infraction. She’s been in two car accidents, has been cited several times for moving violations between 2009 and 2012 and she has failed to attend traffic court a total of nine times. Citations found on her record include: driving without insurance, not wearing a seat belt, not using child restraints, driving with defective lights, driving with a defective winshield or rear window, failure to follow traffic signals and driving with a missing license plate.

She is now set to appear in court on April 12 for the charges she received on Tuesday. Those charges include: three counts of child endangerment, two counts of violating a court order, one charge of driving on without a license, one count of driving on a suspended license, two counts for failure to use child safety restraints and one charge for driving while using a wireless device.

Thankfully, all of the children are unharmed and they are all in protective custody with the Department of Children and Family Services. It’s rather unfortunate, however, because no child should have to ever go without their mother. But in this instance, the mother has placed her children in harm’s way, despite the fact that car safety is so important.

A child should never be removed from their safety seat while the car is moving and each child should be in the safety restraint that is appropriate for their age. Car seat installation has never been easier, but parents and caregivers should check the instructions carefully or ask for help if they need it.

In 2009, 5,474 people were killed in crashes involving driver distraction, and an estimated 448,000 were injured.  Sending or receiving a text takes a driver’s eyes from the road for an average of 4.6 seconds, the equivalent-at 55 mph-of driving the length of an entire football field, blind.

And this mom had a child on her lap…