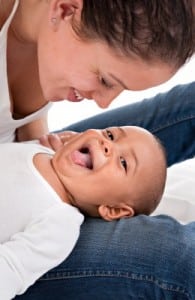 Multitasking comes naturally to most moms perhaps because motherhood actually makes them smarter. A new researcher by a team at the Yale University shows that a woman’s brain undergoes a significant change after her baby is born with growth in the size of the mid-brain and what is known as gray matter.

‘We observed small but significant increases in the volume of gray matter in the brain,’ said study co-author Dr Pilyoung Kim.

The researcher looked at the brain scans of pregnant women before and after giving birth and found that there was an increase in the size of the mid brain after child birth.

What makes this finding extraordinary is that in typical adults, brain size especially the gray matter volume does not increase so easily over a few month’s period. A report published in Behavioral Neuroscience in October of 2010 shows that adult gray matter volume only changes significantly so quickly when the brain experiences exceptional learning, injury, infection or a major environmental change.

The researchers specifically saw growth in new mothers’ brains’ hypothalamus, substantia nigra and amygdala, parietal lobe and prefrontal cortex. Those regions are responsible for our emotion, reasoning and judgement, the senses, and reward behaviour, according to the report.

The researchers add that mothers who were more vocal and emotional about their baby and regularly said their baby was beautiful, special, ideal or perfect had a more substantial growth pattern than others.

Dr. Kim says that the results will help find what motivates some mothers to be more caring towards their children than others.

‘We’re currently researching whether giving moms oxytocin, a hormone that triggers a reward response in the brain, could influence their response to their child,’ Dr. Lane Strathearn, a developmental pediatrician at Baylor College of Medicine in Houston, Texas said.

She says that this latest finding further strengthens her 2008 findings when a study showed that that a baby’s smile lights up a mother’s reward centers in her brain, like the prefrontal cortex.

‘A baby’s smile is a very powerful stimulus,’ said Dr Stathearn. ‘It makes sense biologically. Babies are completely and utterly dependent on their caregivers. It makes sense that nature would build in a system that would reinforce that relationship,’ she said.

What Dr. Kim is still puzzling about is the reason behind these changes.

The team believes that the changes in the hormonal levels like that of estrogen, oxytocin and prolactin may be a possible factor but that can only be ascertained with further research.

For now women are happier and ‘smarter’ being a mom.