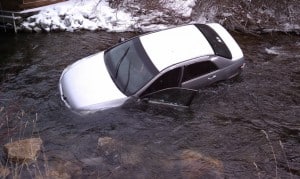 It never fails to amaze me when you read stories of others that are willing to risk life and limb for the lives of others. Today’s story, from Salt Lake City, Utah, proves that there are still plenty of heroes out there willing to save the day!

Roger Anderson, 46, was driving along U.S. 89 with his 9-year-old daughter, 4-year-old son and another 9-year-old-girl when he lost control of his vehicle on the icy road causing the vehicle to land in the waters of Logan Canyon. Anderson was able to break free, but he was unable to remove the children from the car.

Chris Wilden, a former police officer, was one of the first to notice the accident. Without hesitating, he stepped in to help.

“[The driver] was panicked, doing everything he could to get in through the doors, but they wouldn’t budge,” stated Wilden. “I remember thinking to myself, ‘You’re going to see some dead kids, get ready.’ I’ve got three of my own and it was going to be [an awful] start to the New Year.”

Like the driver, Wilden first tried the windows and the doors, but he was unsuccessful. Using what he learned in the training for his current job as a bodyguard and Department of Defense contractor, Wilden then placed his handgun up against the window and shot out the glass.

“I was trying to grab arms, but I couldn’t feel anything. I’m thinking….’What are we going to do?’” Wilden recalled.

And just when it seemed that all was lost, Wilden looked up to see eight other passers-by scrambling down the embankment to help. It had to be the sight of a lifetime!

With everyone’s help, the rescue party was able to turn the Honda Accord upright. They were now able to reach the trapped children.

One of the girls was lucky. She had found an air pocket. And even though she was trapped in her seat, she was able to breathe. Wilden cut her seatbelt and she was pulled from the rear passenger window. Things didn’t look so good at first for the other two children, however.

The little boy was still in his car seat. The second girl was floating in the front passenger compartment. Both were lifeless. The girl was revived quickly, but according to Buzzy Mullahkel, one of the rescuers, the boy had no pulse when he was pulled from the vehicle. With the help of another hero, however, he started breathing again after receiving CPR.

“Emotions started taking over when he started to breathe,” stated Mullahkel. “Everybody started to cheer. Lots of tears and clapping.”

While the young boy was being revived, Wilden was wrapping up his bleeding forearms, which had been cut when he broke the window.

“That was awesome,” he stated. “I knew that’s where the little boy was.”

At the end of the day, it was a happy ending. The little girl and her brother had to be flown to Primary Children’s Medical Center in Salt Lake City. While they are still in the hospital being treated for hypothermia, they are no longer in the intensive care unit and they have survived. They are currently listed in fair condition. Their father and the other little girl escaped with no injuries.

There simply are no words to describe just how amazing each and every one of those heroes are; they saw a need for help and they responded. They jumped in a freezing river to save the lives of young children that they didn’t know and might never see again. But they saw those children as a life worth saving. On behalf of the families of those children, I offer these everyday heroes a deep, sincere, and well-deserved “thank you.”