Music definitely has healing powers. Researchers at Florida State University have announced a new musical device that can help preemies quickly learn the important muscle movements needed to suck, which can reduce their ICU stay.

Babies born prematurely have many hurdles to overcome before they can actually be cuddled in their mom’s arms. Sometimes even the seemingly natural instinct of breast feeding is a difficult challenge for these fragile infants. But now researchers have created an innovative device called the Pacifier Activated Lullaby (PAL), which can aid these infants. 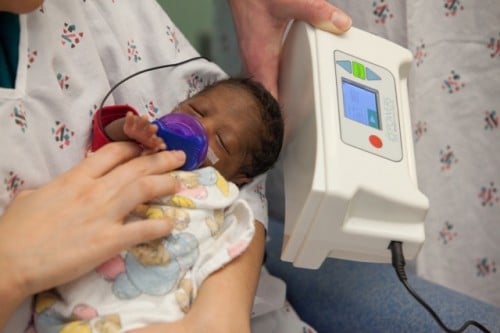 PAL uses music reinforcement to help infants quickly learn the muscle movements needed to suck, and ultimately feed. Studies have shown that PAL can reduce the length of a premature baby’s hospital stay by an average of five days.

“Unlike full-term infants, very premature babies come into the world lacking the neurologic ability to coordinate a suck/swallow/breathe response for oral feeding,” said Jayne Standley, Florida State’s Robert O. Lawton Distinguished Professor of Music Therapy and inventor of PAL. “The longer it takes them to learn this essential skill, the further behind in the growth process they fall. PAL uses musical lullaby reinforcement to speed this process up, helping them feed sooner and leave the hospital sooner.”

The idea of PAL is simple. It has a specially wired pacifier and speaker that plays a gentle musical lullaby whenever a baby sucks correctly. The lullaby is soothing to the baby’s ears and therefore in order to hear it again and again, the baby tries to suck correctly.

Clinical studies conducted by Standley at Tallahassee Memorial Hospital (TMH), University of Georgia Hospital in Athens, University of North Carolina Medical Center in Chapel Hill and Women’s and Children’s Hospital in Baton Rouge, La., showed that preemies who were given the musical reinforcement had 2.5 times better sucking rates than those who were not played the music.

“It’s amazing to watch how much quicker our babies are able to learn the sucking motion after they have used PAL,” said Terry Stevens, a neonatal intensive-care unit (NICU) nurse at TMH. “They are ready to eat sooner, they go home from the hospital earlier, they tolerate their feedings better; it’s just a phenomenal improvement overall.”

The device is now being sold around the world to hospitals through a partnership with Powers Device Technologies Inc. Jayne had invented the device 10 years ago. It went through a number of tests and has now been given a US patent and approved by the FDA.

“After years of research and clinical studies to prove how effective this technology is at solving developmental issues in preterm infants, we are thrilled to be working with Florida State University to bring PAL to market,” said P. Kathleen Lovell, president and CEO of Powers Device Technologies. “PAL truly merges science and art to improve the lives of premature infants. It will make a huge difference in the standard of medical care preemies receive in the NICU.”

The number of premature births has gone up 36 percent since the 1980s and worldwide there are many infants who spent weeks and sometimes months in NICU to overcome their initial developmental challenges. It is definitely music to the ears of parents to have a device like PAL that can help their babies become stronger.

“Many of these babies undergo daily medical procedures that, while necessary, result in added stress, pain and anxiety for the infant,” Standley said. “Using a device that actually gives them comfort while they learn an essential life skill is a valuable complement to NICU care.”