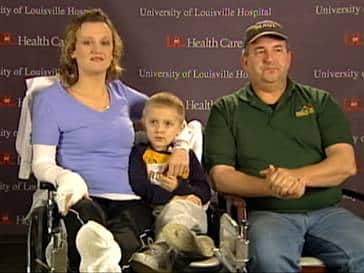 A 22 year-old nanny is being hailed as a hero today after she risked her life and ran right through flames and burning carpet to rescue 5-year-old Aden Hawes.

Speaking with the Today’s Show this morning from the hospital, Alyson Myatt, 22, told Ann Curry she was was sleeping in a downstairs bedroom the morning of the fire.  Aden’s father, J.B. Hawes, was away on business.

The fire began at 3:00 a.m. Tuesday, when a malfunctioning ventilation fan overheated and caught fire in the upstairs bathroom. Alyson extinguished the fire with water and contacted Mr. Hawes, to report the issue. They agreed that there was no cause for further concern.

At 6:00 a.m. she awoke to the sound of the fan crashing to the floor and the squeal of the homes smoke detectors. That’s when she ran upstairs and saw the flames.

“I just saw flames all down the hallway and the bathroom door was on fire, because I hadn’t shut the bathroom door before this big fire, so there was no way to avoid the flames. But before I had even looked at the fire or anything, I was yelling for Aden. He said he was in his room underneath the covers.”

“I didn’t even think about me getting hurt or getting burned,” Alyson added. “I really didn’t even think that I was barefoot. I was just yelling for Aden and I ran and got him. All of it happened really quick.”

Fire officials credit her quick thinking with saving Aden’s life and say there is no doubt that her actions are the reason the little boy is still alive and well.

Mr. Hawes, a single father, hired Alyson to help with Aden, only two months ago.

He is understandably emotional in the wake of the fire and says,

Hawes has set about the task of finding a new place to live, for himself, his son and for Alyson.

“Alyson is part of the family. I know that she’s got her family to go to, but I’ve got to find another place so that she can come home,” Hawes said.

One unfortunate thing about this is that, like many people, Alyson is concerned about how she is going to pay for her ongoing treatment, which may include skin grafts on her feet, as she doesn’t have health insurance. – Jen R, Staff Writer.