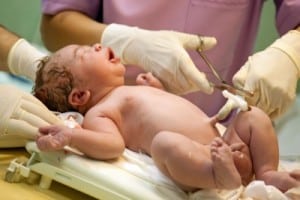 Moms who opt for a natural birth over a cesarean section are making a smarter choice, literally for their babies. According to a new research, natural birth triggers the expression of a protein in newborns that helps in brain development throughout their lives.

The study, which was published in the online journal pLos ONE, notes that  a vaginal birth triggers the expression of a protein known as “mitochondrial uncoupling protein 2,” or UCP2. This protein is very helpful in development and functional activities of the brain of a newborn and more importantly, the beneficial affects continue into adulthood.

UCP2 was earlier found to be an important protein that helped in the development of brain neurons. These effect the short term and long term memory. The protein also helps cellular metabolism of fat, a key component of breast milk.

Therefore the presence of this protein not only helps in better digestion of breast milk, it also makes newborns brainier.

The researchers have not been able to find how natural birth triggers the protein, but it is known that in C-section deliveries, the protein level is reduced.

A Caesarean section is usually performed when a vaginal delivery would put the baby’s or mother’s life or health at risk, although in recent years it has also been performed by request for childbirths that could otherwise have been natural.

“These results reveal a potentially critical role of UCP2 in the proper development of brain circuits and related behaviors,” says Tamas Horvath of the Yale School of Medicine. “The increasing prevalence of C-sections driven by convenience rather than medical necessity may have a previously unsuspected lasting effect on brain development and function in humans as well.”