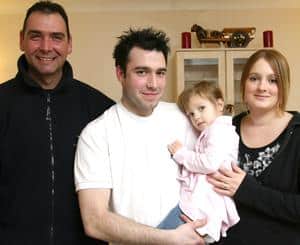 Rachel and Martin Drake with their daughter, Lucy and their neighbour, Deon Schroven(L)

Two year old Lucy Drake was in the bath with her mom when she suddenly slipped into the water and stopped breathing. The panic stricken parents ran for help and finally found their savior in Deon Schroven, a neighbor who helped resuscitate the child.

Lucy was at home playing in the tub last Saturday when her mom Rachel stepped out to get a towel. Doctors say the toddler, at that moment, suffered a febrile convulsion and slipped into the water. Rachel picked her up but her daughter was not breathing.

“As I pulled her up, her eyes had rolled back into her head and I knew there was something wrong.” She said.

Rachel picked up Lucy and ran to the bedroom where the tots dad Martin attempted pressed some water out of the girl’s tummy.  But though some water came out, the little girl was still lifeless.

He then dialed 999 and rushed out of their apartment to get some help. Luckily 32 year old Deon with whom they exchanged hellos occasionally, was at home and he knew first aid.

“Deon took control of the situation straight away,” said Martin. “He gave Lucy mouth-to-mouth and then pumped her chest.”

While Deon helped the baby, his wife Cheryl stayed on the phone with the ambulance and emergency team.

Rachel was in such a state of panic that she left the room while Deon tended her daughter. After a few minutes Lucy regained consciousness.

Meanwhile, the Hampshire and Isle of Wight Air Ambulance had come to a nearby school playground and Martin ran to meet them.When he returned to the flat he could hear his daughter’s cries.

“I could hear Lucy crying. It was such a relief. If she was crying, that meant she was alive.”

“We can’t say how grateful we are to Deon,” said Martin.

Deon said that he had done a course on first-aid at work three years ago but had hoped he would never have to use it.

“I hoped I’d never have to do it for real though, he said. “I did what anyone would have done. I’m just glad that Lucy is alright.”

Lucy was later taken to a local Hospital and stayed their overnight.


Doctors believe that Lucy’s body temperature might have raised due to a throat infection which caused the convulsion.

Martin though is taking no chances and had decided to undergo a first –aid training course just like Deon that helped save his daughter’s life.