Home » Neighborhood Demographics may Effect a Child’s Risk of Obesity 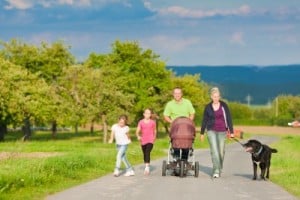 Everyone from parents to physicians and government officials have been trying to find a way to decrease the prevalence of child obesity. School lunch programs have been altered, public announcements have been made, and for extreme cases, diets for children have been designed and administered. But a new study suggests we’re missing a very important piece of the puzzle.

Part of a Canadian research collaboration called TARGet Kids! (The Applied Research Group for Kids) used data on 3,938 children in Toronto to determine if where they lived was directly linked to whether or not they struggled with their weight. The report, which was presented at the Pediatric Academic Societies (PAS) annual meeting, found that preschool children are less likely to be obese if they live in a neighborhood that is safe and within walking distance of parks and retail services.

“A child’s neighborhood is a potentially modifiable risk factor for obesity that we can target in order to stop the increasing prevalence of obesity in young children,” lead author Julia B. Morinis, MD, MSc, a pediatrician at Hospital for Sick Children in Toronto, Ontario, Canada, told Medical News Today.

Healthy children between 0 and 5 years were enrolled in the study, and researchers gathered information on the weight, height, waist circumference, nutrition, and physical and sedentary activity of each child. From each child, researchers also collected blood samples. Information on car ownership rates, population, distance to retail locations, distance to parks, and safety of the neighborhoods was gathered as well.

According to the results, 21 percent of the children were overweight, and 5 percent were obese (which is comparable to the Canadian averages). Neighborhoods that had fewer destinations within walking distance were found to have a higher rate of overweight/obese children than those that had more walking destinations.

This could also be something that parents could use. Armed with this information, parents can make more informed choices about potential neighborhoods before moving or relocating to a new one.