Neil Patrick Harris and partner David Burtka were spotted out with their twins in NYC this afternoon. 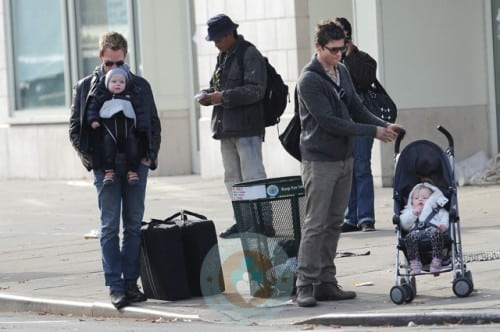 The actor kept Gideon close in a Baby Bjorn carrier while Harper rode in the stroller.

Neil has been in the Big Apple this week co-host the Live with Kelly show.

While out at an event the other night the New York Daily News asked the actor if there was a chance that he could be replacing the recently departed Regis Philbin.

Neal revealed, however, that scheduling and network conflicts make that impossible

“I’m a huge Kelly Ripa fan. But it’s on a competing network and I have a contractual obligation” — to “How I Met Your Mother,” which shoots in Los Angeles — “for at least another year and a half, and I can’t imagine she’d want to fly solo for that long.”

The twins wear Stride Rite SRT Soft Motion Ernie & Abby Cadabby shoes. I love them because the velcro goes in opposite directions, which makes it look like their are ‘hugging’ your childs feet.