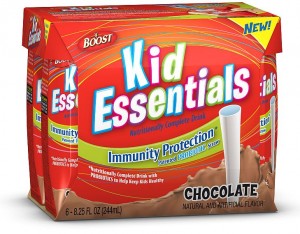 Nestlé, the world’s largest food and nutrition company, is not without it’s problems. The latest is a challenge by the US Federal Trade Commission (FTC) over the supposed health claims of their BOOST Kid Essentials children’s drinks.

In a settlement with the FTC, Nestlé has agreed to stop advertising BOOST as a healthy drink for children. The ads, which appeared on TV and in magazines, were called “deceptive” and bogus. Before the FTC challenge, Nestlé had claimed that the BOOST drinks prevented upper respiratory tract infections and protected against colds and the flu.

Nestlé used probiotics inside the straws that came with the drinks as their claim that the drinks were healthier. Probiotics are live good bacteria that helps aid in digestion. Many foods are being marketed with probiotics, most notably in many yogurts. This is the first time that the FTC has challenged advertising for a probiotic product.

David Vladeck, Director of the FTC’s Bureau of Consumer Protection, states that preventing deceptive advertising is important. Parents want to give their children the best, which can be used against them by companies trying to sell products. Companies cannot use false claims about a product in order to sell it.

“Nestlé’s claims that its probiotic product would prevent kids from getting sick or missing school just didn’t stand up to scrutiny,” said Vladeck.

Nestlé is required to drop their claims on current and future probiotic drinks unless they can provide scientific evidence from human clinical studies on the benefits. The company also has to have any health claims they make about the drinks approved by the Food and Drug Administration. Because Nestlé agreed to remove the advertising, they are not required to pay a fine.

Nestlé is currently the subject of many challenges over their products, most notably their infant formulas and chocolate. Because of deceptive marketing practices and human rights violations, Nestle has been the subject of many boycotts over the last 30 years. Baby Milk Action and Nestlé Critics provide more on the reasons for the boycott. -Summer, staff writer