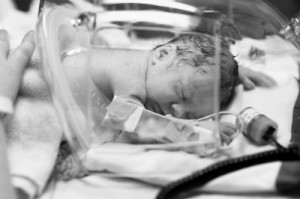 Doctor Miller a senior clinician scientist working out of the Child & Family research institute in British Columbia, Canada is part of an international team working on alternate methods of investigating brain injuries in newborns. Assisted by the latest in imagine technology the main focus of their research is to develop an environment as similar to the womb as possible in order to protect the brain of a premature baby to allow it to fully develop.

Doctor Miller’s study (funded by the Canadian Institutes of Health Research) began in 2006 and looked at brain scans taken from 175 premature babies. A scan of the baby’s brain was taken on the expected due date and a second scan was taken minutes after birth. Future scans were taken at eighteen months, three years, four and a half years, and again at the age of eight. The results of the study found that one in every three premature baby’s suffered injuries to their white brain matter. Miller’s research was attempting to make a connection between the severity of the injuries the premature babies suffered and the existence of developmental problems.

The risks surrounding a premature newborn include injury from oxygen deprivation, bleeding, or a stroke. These life threatening hurdles may interfere with the normal development of parts of the baby’s brain resulting in sight, hearing, movement, or memory loss. Doctor Miller and his colleagues are busy trying to develop methods to repair damage to the areas of the brain that may be damaged within the womb or the first few days of life.

“While the newborn brain is vulnerable to damage it also has incredible capacity for repair. Our goal is to identify ways to promote repair and recovery”.

One of Dr. Miller’s international colleagues, Donna Ferriero, is working with the compound erthropoietin or EPO. She is searching for any curative properties that could effect the growth of brain cells in newborns who have suffered a stroke effecting the development of the brain.

Other scientist have been successful inducing newborns with hypothermia. If the newborn is induced within the first six hours of birth, the brain undergoes a cooling period, during which the brain has been observed to slow down the metabolism reducing permanent damage caused by brain injuries.

Dr. Miller and others are trying to find out “how can we use these tools in a way that is brain protective and that would optimize brain development and allow it to proceed as normally as possible”.

“Neuroprotection is a reality. The question is how do we make it better” (Dr. Miller).

Ultimately he and his colleagues would like the ability to scan a premature baby’s brain and identify any damage that may have occurred in order to help reassure families or prepare a health care plan to address the future needs of the child.

Gabriel Sangara a twin was born eight weeks prematurely which caused blood vessels in his brain to rupture. Doctors reported that the bleed was severe and could not speculate to his parents what medical issues may occur due to the injuries Gabriel suffered. His mother a register nurse who has witnessed the out come of rupture blood vessels, feared the worse for her little son.

At the B.C. Children’s Hospital, Dr. Miller was able to inspect the damage cause to Gabriel’s brain by placing him inside a specially designed cocooned shaped incubator, which he placed into a magnetic resonance imager. The use of the MRI gave Doctor Miller a view of Gabriel’s brain that previous ultrasounds could not.

Though the brothers were both born prematurely Crosby was the one who worried his family the most, weighing only two pounds and four ounces he had stopped growing in the womb. Gabriel, who weighed 3 pounds 9 ounces and appeared healthier than his brother, turned out to have more health problems. He had difficulty breathing at birth due to a collapsed lung and suffered from ruptured blood vessels in the brain(Intraventricular Hemorrhage).

Gabriel was subjected to two scans of this brain by Doctor Miller. The first scan revealed that his brain had swelled as a result of the ruptured brain vessels. His second scan however revealed that the swelling in his brain was decreasing and Gabriel would not need a shunt in order to drain access fluid from his brain.

The twin brothers are now enjoying life at home and continue to put on weight.

Doctor Miller who was able to verify that the boys would fully recover from any trauma suffered due to a premature birth by scanning their brains with an MRI. Clearly the use of this technology is the first step in promoting the repair and recovery process in premature babies. – Jeff, Staff Writer