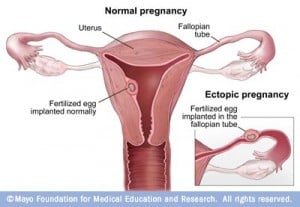 A new test, however, is being studied to see if it can detect ectopic pregnancies sooner. Dr Mary Rausch from Pennsylvania University is leading the study of the new test. A trial has already went underway, involving 200 women, half of whom were known to have ectopic pregnancies. The test was able to accurately detect the ectopic pregnancy 42 percent of the time.

The blood test screens for four biological markers that are known to occur during ectopic pregnancies.

“Sometimes it takes days or weeks to diagnose. During that time they can have a tubal rupture, and that can lead to maternal morbidity and mortality.

“If the tube does rupture, the woman can bleed into her abdomen. It can be fatal if not treated quickly enough,” she stressed.

The earlier an ectopic pregnancy is confirmed, the better the chances are for the mother. Earlier detection can also mean a safer option to remove the pregnancy through use of drugs rather than surgery. Surgery often includes removing the fallopian tube that the pregnancy was implanted in, reducing the fertility of the woman. Being able to treat the pregnancy earlier can preserve her fertility so that she can have a normal pregnancy later on.

Research on this blood test has been presented to the American Society for Reproductive Medicine (ASRM) conference in Denver, Colorado. The researchers hope that this new test will be able to spare women the pain and suffering that can come from a late discovered ectopic pregnancy. – Summer, staff writer