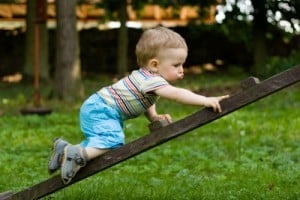 To prevent obesity from becoming a problem as they grow older, new Canadian guidelines recommend toddlers and preschoolers be more active. In fact parents are being urged to let their kids be involved in more physical activities for at least 180 minutes a day.

The guidelines have been suggested by a joint committee of members of the Canadian Society for Exercise Physiology, and ParticipACTION, the not-for-profit organization dedicated to inspiring active living for Canadians.

They suggest that children between the age of 1 and 4 should remain active at least for 3 hours a day. This activity does not necessary mean an exercise routine, but more playing, crawling, and walking running than just sitting at one place.

The guidelines also limit the time spent by kids in front of TV, computer or tablet screens. For kids under the age of two, no screen viewing should be allowed and for those between two to four only one hour or less of screen time is allowed per day.

This is the first time that such guidelines have been released in Canada. The recommendations have been supported by Children’s Hospital of Eastern Ontario Research Institute, Healthy Active Living and Obesity Research Group (CHEO-HALO).

The experts say that the guidelines put Canada is the forefront among nations tha are putting an effort to provide activity benchmarks and sedentary-time guidelines for preschoolers. But it also shows that obesity is a growing concern in Canada.

In the last 25 years obesity rate of children has nearly tripled. As many as 26 per cent of kids between two and 17 years are now overweight or obese. That number jumps to 41 per cent among First Nations children.

The researchers noted that currently preschoolers spent more than 80 percent of their wakeful hours in a sedentary way. Also children today are watching TV and getting addicted to computer screens much too soon.

Dr. Mark Tremblay, who chaired the committee that drew up the guidelines and who is also the director of CHEO-HALO, in Ottawa says,

“Regular physical activity is essential at a young age as it contributes to bone and skeletal health, motor skill development, psychosocial health and cognitive development. Lifestyle patterns set in the early years predict health outcomes later in life,” he adds.

Kelly Murumets, the president and CEO of ParticipACTION adds that rather than being inside, it is important to take kids out where there are able to run and play.

“It is crucial for parents and caregivers to give young children regular opportunities to move more, and it can be as simple as getting outdoors to explore the neighbourhood rather than sitting in front of the TV,” she said.

For younger babies she says it is better to put them on the floor where they can crawl, and explore things than keep sitting in a high chair.

“Motor development and movement is the basis not only for our healthy bones and growth, but in later years, our cognitive and brain development, our social skills, our psycho-social markers, self-esteem, learning, attention – it has incredible benefits,” she said.

The Canadian Pediatric Society, also has shown its support towards the new guidelines. Dr. Claire LeBlanc, a pediatrician at the Montreal Children’s Hospital and the chair of the CPS Healthy Active Living and Sports Medicine Committee says that it is not just parents but the society in general which should take the responsibility of developing healthy lifestyle activities for all.

“Society needs to make physical activity for children a priority because we all have a role to play, including health care teams, governments, schools, facilities and all levels of decision-makers,” he said in a statement.

The society recommends communities maintain safe recreational areas like community playgrounds, parks and sidewalks, compulsory daily physical education for all grades in schools, more affordable sport and recreation programs after hours at schools and at local facilities by the government and community.  They also believe that advertisements that promote un healthy foods during children’s TV shows need to be eliminated.