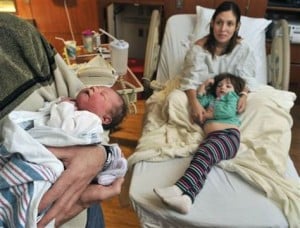 Joanna Mallory LeFevre might never dislike road trips like other kids thanks to her adventures on the first day in the world. The baby girl was delivered in the front seat of a truck by her father while travelling down the icy highway between Cañoncito and Santa Fe during a snowstorm early Tuesday morning.

Elizabeth LeFevre, the new mom says that Tuesday was her due date and she began having contraction near midnight on Monday. When her pain increased at 2:00 am she, along with her husband Russell and three year old daughter Renee loaded into a truck driven by Russell’s cousin Neil and headed to hospital.

“It was blizzarding outside,” Russell said. “They had shut down I-25 between Eldorado and Las Vegas.”

But a few minutes on the road and Elizabeth knew she would not make it in time to the hospital.

“We got like two miles down the highway, and I told him there was probably no chance we were going to make it to the hospital,” Elizabeth said. “As soon as I said that my water broke.”

Russell came to his wife’s rescue. He checked and saw that the baby was already half way out. As the truck sped on the Old Las Vegas Highway, the other half of the baby was out too.

“I turned her to the side and gave her a little back slap, and she coughed up some goop and I wrapped her up in a jacket,” Russell said.

Thankfully for him baby delivery was not a cause for panic as he is employed as a nurse’s assistant at Christus St. Vincent and had just graduated from nursing school Dec. 8.

He says though that this was different from the hospital conditions.

“They teach you how to birth a baby, but you’ve got a suction bulb and blankets and clamps and everything you need [during the lesson],” he said. “In the moment I was totally unprepared to deliver a baby in my truck. I had shoelaces instead of clamps, and I was wiping out her mouth with my finger instead of a suction bulb. It was pretty wild.”

When Elizabeth delivered the placenta a few minutes later, Russell wrapped it up in another jacket.

Neil, meanwhile, was on the phone with an emergency dispatch operator who advised them to tie the baby’s umbilical cord with a shoe lace.

After the birth they headed for the Hondo Fire Station 2 near Eldorado but no one answered even after they banged the door. A state police officer parked on Interstate 25 later gave them blankets and called an ambulance from the Hondo fire station to take them to the hospital.

Russell also recalled how Renee behaved like a perfect big sister during the whole adventure. She was calm and tried calming her mother down by telling her “It’s going to be OK.”

“It was amazing,” Russell said. “It was awesome. We got her into the ambulance and the paramedic said we did a great job. The baby was healthy and pink and crying. She was a little cold. But she was born in the middle of a blizzard.”