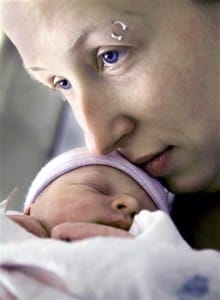 A new mom is happy to be able to express her gratitude to a gentleman who helped assist in the arrival of her baby before paramedics were able to arrive.

On December 05, a mysterious man helped Shirley Snyder’s granddaughter Keri Lavetan deliver her first baby in the back of her car in a convenience store parking lot.

As the pair were waiting for an ambulance a man approached them and asked them if they needed any assistance. He instinctually took the cell phone from Shirley and quickly began taking instructions from the emergency dispatcher.


“You’ve got to prop her head up. Are your hands clean?” the dispatcher asked the man.

He then searched the car for anything he could use as a makeshift pillow and created a ball out of some of the clothing in the bag he found in the backseat.

While reassuring the mom-to-be that she could deliver the baby, he propped her head up using the balled up clothing and used a shirt to catch the baby.


The dispatcher asked him to look down to report to her what he could see. The baby was crowning.

When Keri gave one big push, the baby came out and the man gently cradle the newborn in the shirt.  But he wasn’t breathing.

The quick thinking stranger put him on his side.   The baby coughed, let out a cry and took it’s first breath.

He then handed the new mom her baby and as fast as he appeared he was gone again.

After speaking with a local business,  Keri and her grandmother found out that the mysterious stranger that night was a man by the name of Joe Lesoken, a 39 year old concrete worker. Keri has since been in contact with her savor and has conveyed her gratitude.

The dad of 3 remains humble when asked about that night,

‘It was just something that needed to be done. I knew she wouldn’t be able to do it alone. I was praying the entire time”.