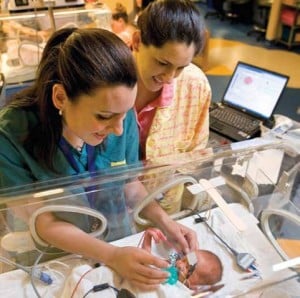 Researchers in the Netherlands have found noticeable benefits to diagnosing hearing loss through newborn screening, compared to diagnosing a problem through a distraction hearing screening later in infancy.

The study, conducted by staff at the Leiden University Medical Center, analysed data from the 570,000 births that took place in the Netherlands from 2003 to 2005.  Out of all those births, 400 infants were identified as having a permanent hearing disorder.

The researchers were able to follow approximately 300 of the infants with hearing impairment.  Hearing loss had been found during a newborn screening in 183 of the cases and with behavioural testing, around nine months of age, in 118 of the cases.

Researchers analysed the development of both groups, when they reached 3- to 5-years of age.  At that point, it was noticed that the children who received their diagnosis as newborns were outpacing their counterparts, both in language and in overall development.

In their conclusion the researchers involved in the Leiden study, which was published in the October 20th issue of American Medical Association, wrote,

The National Institute on Deafness and Other Communication Disorders (NIDCD) already urges parents to have their infant’s hearing screened within the first month.  Children with suspected hearing loss should be seen by an audiologist prior to three months and, if diagnosed with hearing impairment, a course of action should be considered by six months.

The race is on because children’s ability to hear language is crucial in the first three years and, whether it is evident or not, children are already learning speech and deciphering language in their first six months of life. – Jen R, Staff Writer