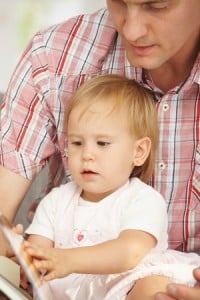 Watching a child learn to talk can be one of the most amazing experiences ever in life. It’s incredible to watch them pick up different words, what they mean, and it’s especially fun to hear how they pronounce words when they first learn them. Sometimes, you even have to translate what they are trying to communicate to you. A new research study indicates that fathers play a significant role in a child’s language development.

Researchers also found that the dads in these families “made unique contributions to children’s expressive language development.” It was revealed that those dads employed the use of more words during playtime with their children, who thus had more advanced language skills 12 months later. Both Vernon-Feagans and Pancsofar thought that the situation could be totally different in lower income families, so they decided to take a look and find out. Families were chosen from central Pennsylvania and eastern North Carolina. Half of the children from these areas lived in poverty at the time of the study. In total, 1,292 infants living in two-parent families were studied.

The researchers would visit the families when the infants were six months old, and followed up again at age fifteen months, and once more at three years-old. They learned that the education of the fathers, as well as their vocabulary usage when reading a picture book to their children at six months-old were directly related to the child’s expressiveness when they were fifteen months-old, as well as the children’s advanced language at three years-old. This information stayed true, despite the mother’s educational background or in what way she spoke to her children.

But that’s not all that dads do. As Catherine Tamis-LeMonda of New York University found, dads also contribute to their child’s mental development in a broader way than just language skills. Dads can also influence intellectual growth, behavior, and even how a child adjusts to going to school. Nearly 300 dads were studied on how they interact with their children. Researchers also looked at mother’s interactions with their children at two years of age, and once more at the age of three.

The study’s findings directly challenge the common theory held by some researchers that “low-income parents primarily engage in authoritarian exchanges with their young children and that fathers are harsh disciplinarians.” The parents studied showed a higher level of sensitivity for their children, and held their children in a more positive regard.