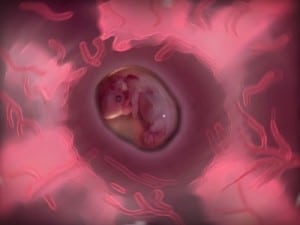 Deciding to have a baby is a very big deal and once the decision has been made, you want it to happen immediately.  Wishful couples often find themselves wonder how long they can expect to try before becoming pregnant.

A new study, commissioned by the website FertilityFlower.com looked at the conception journey of 3,492 American mothers between the ages of 21 and 35 years.  The research found that, on average, healthy couples became pregnant, with their first child, in six months and one week.

But, an average of six months and one week isn’t the end of the story, it’s just the beginning.  Everyone’s conception journey is different.  While 9% of women conceived within the first month of trying, another 19% were at it of 8-10 months and 14% of study participants had success between 12 and 14 months.

So what do you do if the conception process is taking longer than you’d hoped?  According to the study, 56% of the respondents tried to help things along in one way or another.  More than half of women tried unconventional techniques while 41% stuck to medically proven strategies.

Diet changes and consuming specific foods were very common tactics used by 39% while 13% improved their fitness through exercise.  Position during intercourse was something 42% of respondents focused on.

Kimberly Ann Rai, founder of FertilityFlower.com, a website that focuses on helping women discover their most fertile times said,

“Conceiving a child is a very special time for couples.  It can be wearying and even heartbreaking when it doesn’t seem to be going your way.  It is a process that can take time, but there are steps that can be taken to help increase the chances of conception and tracking your symptoms on sites such as FertilityFlower.com is one way to do so.

Trying different methods to help speed up the process of getting pregnant is certainly an option.  It can certainly boost morale and bring back the enthusiasm and excitement that may have been lost during the process.  One thing that this study has definitely proven is that it takes a different amount of time for everyone, so the key thing to remember is not to give up if it is taking longer than you had hoped.”