As we all know, most parents tell a little white lie every now and again in order to make the day go by a little easier, or to calm a tantrum or two. New research suggests that we may want to stop using this tactic, though. The study, conducted at the Massachusett’s Institute of Technology has found that children can tell when a parent, teacher or caregiver is deliberately lying to them, and will even try to fill in the gaps of information themselves. 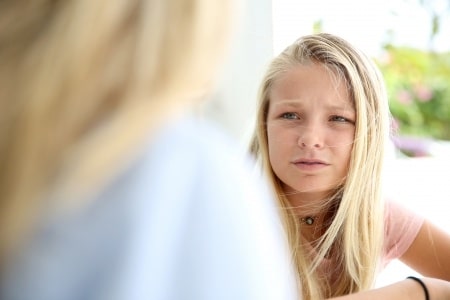 Hyowon Gweon, the lead author of the study, which is published in the journal Cognition speaks of how children learn to determine who to trust from early on in their lives. This is an important skill to have, because everything a child learns usually comes from other people around them. Gweon says, “When someone provides us information, we not only learn about what is being taught, we also learn something about that person. If the information is accurate and complete, then you might also trust that person in the future. But if this person has taught you something wrong, has made a mistake, or has omitted something that’s important for you to know, then you might want to suspend your trust, be skeptical of the information he provides in the future and even seek other sources of information.”

The study compounds upon information from a research paper published in 2011, in which a team of researchers studied how a child behaved when a teacher taught them only one function of a toy that could perform four other functions. The researchers found that the children in the study spent most of their time playing with and exploring the one function that the teacher had taught them. However, the children who did not learn anything about the toy had spent more of their time exploring all of the other functions of the toys features, and discovered more of them.

Dr. Gweon wanted to delve deeper into this topic, and investigate what children would think of a teacher who did not fully disclose all the functions of the toy. She explains,

In the initial experiment, children ranging from ages six to seven were given a toy to learn about on their own, until they were able to discover every function of the toy. The second group of children received a toy that had approximately four buttons, with each button making the toy do something different. The last group was given a toy with only one button and one function. The children then watched a puppet show, where a ‘teacher’ puppet taught a ‘student’ puppet how to use the toy. For the two toys, the puppet’s lesson was the same, showing the children only one function – the wind-up mechanism of the toy.

After the lesson on the toy, the children were then asked to rate how helpful the teacher puppet was, on a scale of 1 through 20. Those children who already knew that the toy had three other functions, which went un-demonstrated during the lesson, gave the teacher lower ratings than the children who were taught that the toy only had one function. A follow-up experiment was conducted, with the same ‘teacher’ puppet, demonstrating a second toy, only teaching about one of it’s four functions. Those children who had already seen a demonstration, of which they knew was incomplete chose to explore the toy further, which suggests that they did not fully trust the teachers lesson.

“[They] can evaluate others based on who’s providing information that is enough or not enough for accurate inference. They can also adjust how they learn from a teacher in the future, depending on whether the teacher has previously committed a sin of omission or not.”