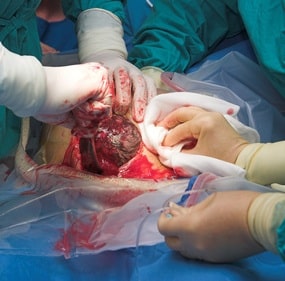 Some babies, try as you may, just aren’t willing to make an exit without assistance. This assistance can be given through one of three methods; forceps, vacuums or Cesareans. Over the years, the use of forceps has declined dramatically while the use of vacuums has increased and Cesarean births have climbed 21 percent over the last decade.

Dr. Erika F. Werner, an obstetrician at John Hopkins School of Medicine in Baltimore says that no evidence has been given to support the increased use of Cesareans and vacuums, nor has there been any evidence to support the decline in forceps usage. If anything, Werner says that evidence found in her study supports the idea that forceps are actually the safest birth assistance method when considering the possibility of brain injury.

Werner and her colleagues compiled information on the births of 400,000 first-time moms. They were looking specifically for neurological complications that might be caused during an assisted birth, namely seizures and bleeding in or around the brain, otherwise known as subdural hemorrhaging.

Neither subdural hemorrhaging nor seizures are common in infants that are born with an assistance method, but they do exist. And according to Werner, the focus should really be placed on reducing the risk of seizures because, unlike subdural hemorrhaging, seizures can have a lasting effect on the health of a newborn.

After analyzing the data, the researchers found that seizures were less common with forceps than with any other type of delivery assistance; 0.12 percent with forceps compared to 0.3 percent with Cesareans or vacuums. Subdural hemorrhaging was found to be lower, however, in Cesarean births; 0.1 percent for Cesareans, 0.14 percent for forceps and 0.19 for vacuums.

Still, Werner says that there is no real evidence that makes one method of delivery assistance better than another, especially when the doctor has to think quickly to ensure the safety of baby and mother. She does, however, encourage mothers to talk to their doctors before delivery about the risks and options. This way, if an assistance method is needed, the doctor has a better idea of what the mother is hoping for and the mother has the comfort of knowing what will happen during the delivery process.