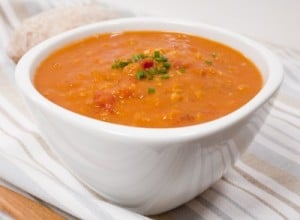 You may have heard it said that the best way to cure an illness is to prevent it altogether; that’s exactly what researchers at the University of Aberdeen hope to do with asthma.

According to the most recent data, approximately 5.2 million individuals are treated for asthma; 1.1 percent of those people are thought to be children. In the UK alone, 5-10% of adults and 10-15% of children suffer from the condition.

Wheezing, coughing and breathlessness are the main symptoms of asthma. Currently, there is no cure for asthma, and the only method of treatment is symptom-based treatment. This may be changed, however, if researchers are able to find a way to prevent the condition altogether in the next generation.
Working closely with Baxter Food Group in Scotland, researchers are developing three different soups that contain high levels of Vitamin E. Foods that will be included in the soups are beans, lentils, wheat-germ, sunflower oil and sun-dried tomatoes. Placebo soups will also be made to look and taste like the real soups. Through the use of the soups, researchers hope to increase the vitamin E intake of pregnant women to 15mg per day; this is an increase on the 8mg per day average.

Over the course of the 12 month study, pregnant women involved will begin consuming 3 servings of soup per week once they reach 12 weeks of pregnancy. They will continue this regimen until they deliver. Once their baby arrives, researchers will monitor the lung function of the infants during the first week of life.

“The potentially much more important strategy of asthma has been recognized and researched, but not yet realized,” said Graham Devereux, Professor of Respiratory Medicine at the University of Aberdeen and Honorary Consultant Physician at Aberdeen Royal Infirmary. “We are launching an initial pilot study to see if pregnant women will take part in such a trial and are happy with the soup intervention. Depending on the outcome, we will then launch a much bigger which we hope will show that vitamin E does indeed reduce the risk of children developing asthma.”

Prior studies have linked a lower vitamin E intake in pregnant women with a higher risk of asthma in their children by age five. This is, however, the very first study to use natural vitamin E, rather than vitamin E supplement pills, to determine whether or not the increased intake can actually help stave off asthma in young children.

“Although far more difficult, it seems more natural to give vitamin E in a natural food form rather than a vitamin E pill because the vitamin E containing foods comprise a complex mix of nutrients that might be critically important, when one considers the foods containing vitamin E, soup seems to be an obvious intervention,” Devereux said. “The ultimate aim of this research is to reduce the prevalence of asthma by an effective, inexpensive, acceptable and safe public health dietary intervention. If successful, the proposed intervention could form the basis of public health dietary advice to pregnant women that could reduce the prevalence of childhood asthma by 15-20% within five years.”

Should their study prove to be successful, researchers plan to apply for funding for a similar, larger-scale study.