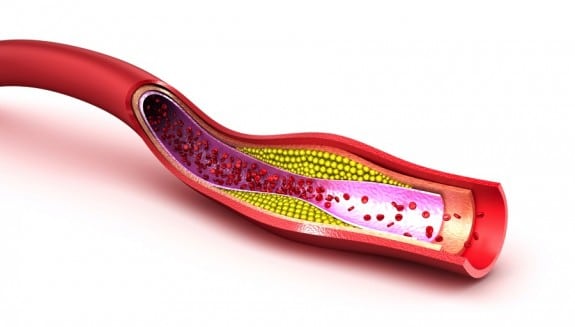 Dr. Julie Brothers, a preventative cardiologist at Children’s Hospital of Philadelphia, who was not involved in the study, told NBCNews “While it’s not a surprise that they have more abnormalities than non-obese kids, it is pretty frightening. It’s quite high.” Brothers was not involved in the survey. These results indicate that parents should have their children’s doctors start screening at even younger ages. According to the American Academy of Pediatrics, it is recommended that children aged 9-11 be screened.

There are many studies to back up information that shows heart disease starts young. Unhealthy cholesterol levels can mean that arteries are already being blocked with “plaques” that can lead to strokes and heart attacks. Children as young as three have shown artery-clogging, and ultrasound examinations of children as young as 10 have shown that they can have arteries that are almost as clogged as a middle-aged person.

Children can inherit a genetic form of high cholesterol called familial hypercholesterolemia. However, the larger factor at play is poor diet and lack of exercise. NCHS examined data from 2011 to 2014, which was taken from a very large survey of health in the United States. It was written that, “One in five youths had high total cholesterol, low high-density lipoproten (HDL) cholesterol, or high non-HDL cholesterol.” Thirteen percent had low levels of HDL cholesterol. HDL actually helps “scoop” up the bad cholesterol, carrying it away, so having a high HDL is actually good.

Brothers said, “I look at things like what they are drinking throughout the day. The majority are drinking a lot of sugar drinks. It’s very worrisome that their HDLs are getting lower, probably because kids are not as active as they used to be.” She suggests adding more exercise and cutting back on the sugary drinks. Over 14 percent of children aged 6-8 had abnormal cholesterol levels, with 26.9 percent of teenagers aged 16-19 having the same problem.

Brothers believes that it is never too late to turn over a new leaf, saying, “I always start with diet, even with familial hypercholesterolemia. The sugary drinks are a huge thing. Then I work on fiber.” She recommends that children eat one vegetable or fruit with every snack or meal to try and get the five servings a day minimum. She also said, “The vast majority of the overweight or obese kids that I see do not need medicine. I wish I could tell them there is a little pill they can take. The only pill really is hard work.” She said that she works really hard with the children on exercise and activities, “It’s important for everything,” she said. “We want our kids to live longer than we do and at this point they are not going to,” she said.