Babies do choose strange birth places. For one Philadelphia mom her baby daughter decided to arrive at a local hair salon. Thankfully a team of able police officers arrived just in time to help mom and baby. 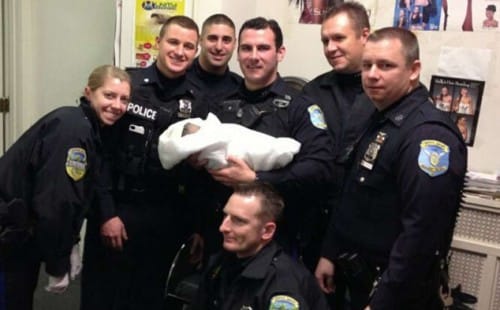 It was late Thursday night at about 11 pm when police were called to Zena’s Hair Care.  An odd place and time, Upper Darby Police Superintendent Michael Chitwood found it strange for a hair salon to be open so late.

When they reached the salon, they found 24 year old Holeou Banbara right in the middle of the shop in labour.

The officers asked her to sit down but she couldn’t because the baby was already crowning. That is when they lifted at took her to a room inside.

“They pick her up, take her to a back room and lay her down,” Chitwood said. “Sure enough, there’s the baby’s head.”

The baby’s head was showing but she was stuck in an odd position with her shoulders blocking the way. Soon another officer rushed in to help. He was a trained paramedic and helped turn the baby so that the shoulders could come out.

The drama was not over yet though. The umbilical cord had wrapped around the baby’s neck and it was up to the paramedics who arrived shortly to safely cut it.

Mom and daughter were taken to Delaware County Memorial Hospital, where they were reported to be in good condition.