While out on Monday evening, Alex Diaz spotted a stroller, but thought it was empty and discarded.

Less than 12 hours later, during a walk with his boys the same stroller was still there so he took a closer look and found a baby with his umbilical cord still attached. 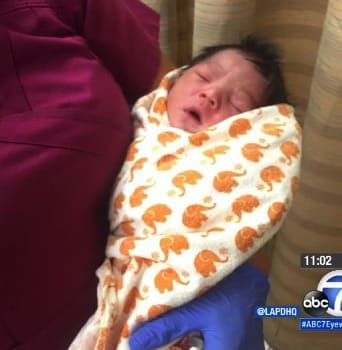 “When I got up close to the stroller and the blanket was clean, it was just like, ‘Oh, I hope nobody did this, I hope I’m not about to find a baby in here,’ and sure enough that’s what happened,” Alex told ABC7News.com. “It was burning hot. He was sweating. His pajamas were soaked in sweat. It was horrible. I don’t know how somebody can do something like that, not even animals do that.” 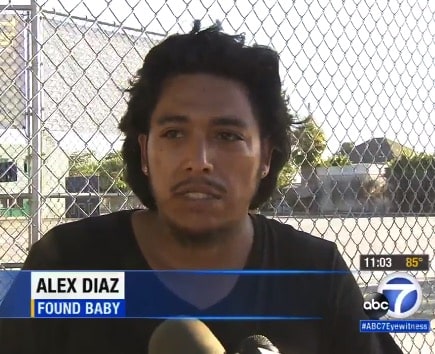 Believed to be only a day old, the baby boy was dehydrated, his sugars were low and he was considered to be in serious condition when he arrived at California Hospital Medical Center. By Wednesday morning he was eating, receiving IV fluids and was doing well, hospital officials said.

The police are looking for witnesses and hoping that surveillance footage from nearby businesses can help them find the baby’s mother.

Abandoned just steps from St. Agnes Catholic Church, Father David Matz told ABC News he wishes the mother would have just left the baby with them.

“That’s what saddens me about the whole situation that the child was left across the street under a mattress in a stroller, and they could’ve easily just rang the doorbell and left the child there.”

Like many states California has a safe haven law that states anyone with legal custody can safely surrender their baby at a fire station or hospital, as long as it is within 72 hours of the birth.