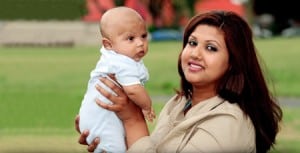 A six-week-old baby has re-defined the meaning of miracle after he survived being catapulted out of a car traveling at a speed of 70 mph on the M6 motorway.

Jonathan Samuel was strapped in his car seat when his father’s car tire blew and then spun around 6 times. The baby, still in his infant seat, was then thrown from the car, where he bounced along the side lane and slid out of the harness before stopping at the edge of the highway.

His father Oliver could only imagine the worst as he stepped out of the car to look for his son. He said, “I was screaming because I expected to find parts of him and blood. I was looking for his body.” 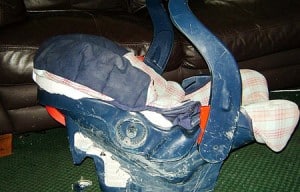 Oliver eventually found the empty seat. “It was like a nightmare getting worse. It was agony, our baby was gone.”

But all of a sudden the father heard his baby cry and that is when he spotted him and cradled him to safety before any other mishap.

His wife Sadaf’s anguish ceased as soon as she saw her baby. She says, “I just grabbed the baby, bracing myself for what I might see. But there wasn’t a scratch. He was distressed but as soon as I cuddled him he went to sleep.”