While abandoned babies are alarmingly common in China, not many of them have had to survive against odds like those stacked against a little boy who has been lovingly named Haiou, which means seagull. Naked, bruised, and found near sewage infested rivers, the survival of this child is nothing short of a miracle. 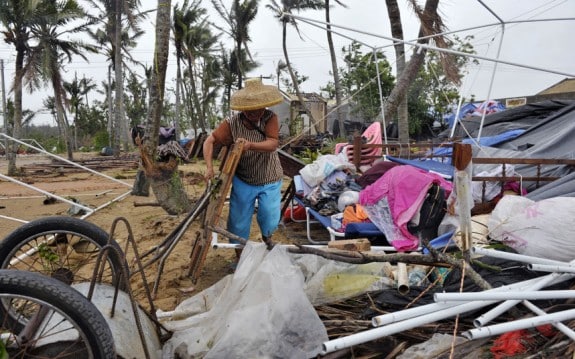 According to authorities, the river with a boy was found has been blocked off from surrounding factories and apartment blocks. Flowing was sewage, its riverbanks infested with flies in rats, this river has become a dumping ground for nearby apartments. Residents of those apartments told SCMP that few people ever venture near the water. But earlier this week, a woman spotted a baby from the balcony of her second-story apartment. She alerted the security guard who then called the police as she ran to pick up the child and swaddle it.

Bruises on his head, left foot, and right-hand are testament to the unthinkable conditions that this little boy has lived through. And the sand in his mouth shows just how unlikely his odds were as he lay near the river as typhoon winds of up to 144km/hour wreaked havoc on the world around him, bringing floods and damage to several parts of Southern China.

“The baby’s whole body had turned blue. [He] was shaking from the cold and crying, but couldn’t make any sound. The condition was very critical,” policeman Li Xiaolong, who was called to the scene, told SCMP.

But somehow, this little boy, found wit still 20 cm of his umbilical cord attached, has survived and is reportedly in stable condition.

“The little buddy is very strong,” a spokesman for the local police station said. “We hope he can be healthy and happy, like the seagull soaring above the sea. [We] also hope his parents can contact us quickly after reading about the news.”

Police say the case is still under investigation, and that once he is better, the baby boy may be sent to a welfare home.

Though it is illegal, cases like this are extremely common on the mainland. In fact, it is become such an issue that some cities have set up “baby hatches” where parents can safely and anonymously leave their unwanted children. Backed by the Ministry at Civil Affairs, the program has drawn fierce criticism from some that believe it may encourage parents to abandon their children. However, those that support it see it as a way to save innocent, young lives. Dongguan, the city where the little boy was found, is expected to have their “baby hatch” project finished within this year.