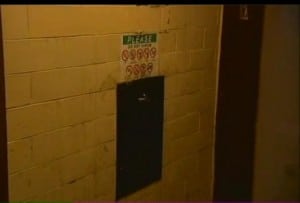 This weekend a newborn baby miraculously survived being tossed eight floors down a trash chute. He had been thrown down from one of the Fort Greene houses, but was saved and is in stable condition.

According to police reports, the building superintendent heard cries from a baby that was inside a plastic trash bag which was in the trash chute.

The superintendent immediately informed the police and found the newborn that had landed on the trash safely. The baby seemed to be 12 hours old and shockingly the umbilical cord was still attached.

The police later charged Laquasia Wright, 18 with attempted murder of the baby and endangering the welfare of a child.  Police suspect that she tossed the baby from the eighth floor.

The incident has left the whole neighborhood shocked.

“That’s just sad and pitiful. They need to burn in hell, that’s what they need to do,” said resident Tisha Holmes. “People are shocked here. They could’ve given it to anybody. Ain’t nobody in their civil mind would do that.”

Another neighbor Fontaine Simon said she could not believe something like this could occur in her building.

“Oh God, I hope the baby is all right,” she said.”I’ve been living here for 30 years, nothing ever happened like this before – never.”

The baby was taken to the Brooklyn Hospital immediately after the rescue and is said to be fine.  Hopefully he will be adopted into a family that will take good care of him.