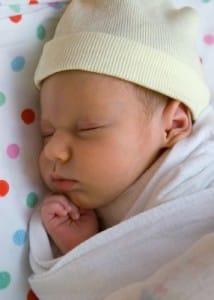 Newborns spend most of their time sleeping once out of the womb and if new research is true, they spend that sleep time daydreaming.

Scientists at the Imperial College of London scanned the brains of 70 babies in different stages of developments and found that they are capable of daydreaming and introspection as soon as they come into the world.

Previously it was believed that this stage of day dreams only develops in the first year of birth with the development of the ‘resting state networks’ of the brain. The new study though shows that the development has already occurred in the baby inside the womb and the brain connections are fully formed by the end of a normal pregnancy.

The present researchers believe that the link between the development of the resting state networks and daydream is an old theory many believe to be true. Therefore either the link is actually not there or babies are cleverer that previously thought.

Professor David Edwards, the study’s lead author, said: ‘Some researchers have said that the default mode network is responsible for introspection – retrieving autobiographical memories and envisioning the future, etc.  The fact that we found it in newborn babies suggests that either being a fetus is a lot more fun than any of us can remember – lying there happily introspecting and thinking about the future – or that this theory is mistaken.’

The professor also added that the brain scans of babies show that human brains are more developed inside the womb than thought earlier. ‘However, most of the brain is probably engaged in activities of which we are completely unaware, and it is this complex background activity that we are detecting.’ said the scientist.

The researchers used a 4-dimensional brain atlas developed at  the Department of Computing at Imperial College London to map the activity in the babies’ brains against the known location of different networks inside the brain.

The brain connections that trigger the day dream activities develop after 30 weeks in the third trimester and are fully formed by 40 weeks when babies are born.

The scientists are now busy trying to find how these networks are affected by illness and if they can be used to diagnose problems. – Atula, Staff  Writer