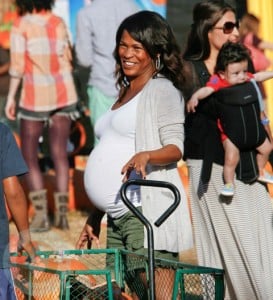 Congratulations to Nia Long and boyfriend Ime Udoka on the safe arrival of their first child together – a boy!

“Both mother and child are healthy and happy to be home,” spokeswoman Priscilla Moralez says.

The new baby was a planned surprise!  The couple really wanted a child but doctors told Nia that she wouldn’t be able to conceive because of her age.  Just a couple months later she got the exciting news during a check up.

“I was supposed to go to Ghana to do a film and that’s when I found out I was pregnant. I had a doctor’s appointment to get the yellow fever shot and they were like, ‘Miss Long, we can’t give you a shot’… I almost fainted. It was the best moment and the sweetest surprise ever.”