Alannah Shevenell, a precocious nine-year-old from Maine, is happy “just being home,” after all she’s been through over the past few years. 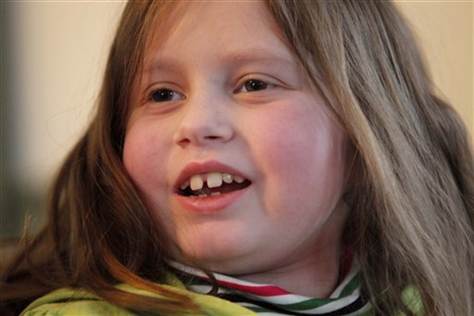 In 2008, five-year-old Alannah’s belly was swelling, but she was losing weight.  This worrying symptom, combined with a fever, led her grandparents to seek diagnosis.  What they learned was terrifying.

Alannah had a rare form of sarcoma.   There was a large inflammatory myofibroblastic tumour growing in her abdomen, coiling its way around her organs.

What followed were unsuccessful attempts to remove the tumour, and chemotherapy that yielded no result.  The tumour ravaged forth.  It became difficult for Alannah to eat, she was in pain and she was swollen with fluid.

She needed surgery to remove the entire tumour and the organs it had engulfed, but it would be a year before suitable transplant organs were found.

Finally, last October, Dr. Heung Bae Kim led the surgery to free Alannah of her tumour and transplant a set of six healthy organs, including the oesophagus.  It is believed to be the first instance of an oesophageal transplant.  She also received a stomach, liver, spleen, small intestine, and pancreas; all from the same donor, a child about the same size as Alannah.

Alannah’s grandmother, Debi Skolas is grateful to the family who chose to donate their child’s organs, in the face of tremendous personal tragedy.

“That was a courageous decision,” Debi said.  “I still cry when I think about it.”

According to Dr Kim, the removal of the organs and tumour presented the most difficult challenges in the surgery.  “It’s probably one of the most extensive tumour removals ever done,” he said.

Alannah only had a 50 : 50 chance of surviving the surgery.  She made it through, however, and survived the infections and complications that followed.  Last Wednesday, at last, she returned to the 192-year-old farmhouse she shares with her grandparents.

Healthy and energetic as she now seems, Alannah’s trials aren’t completely over.  She is on a regimen of nine different medications; each precisely dosed to be administered two, three, even four times a day, depending on the drug.  She has a feeding tube and an ostomy pouch.  Her grandparents must monitor her input and output exactly and measure her blood sugar.

Alannah is extremely susceptible to infection.  She must take precautions, avoiding crowded environments like school, malls and churches.  A private tutor works with her, at home, 20 hours a week.  She also has to avoid other risks like swimming in area lakes and consuming raw vegetables and fruits, unless they are thick skinned.  Her grandparents have installed ultraviolet lights in their duct work to kill off mould spores.

The economic toll on the family has been immense.  Friends hope to ease some of the financial burden with a fundraiser.

Even with all of the challenges, the family is thrilled with Alannah’s second chance and they are looking forward to a bright future. – Jen R, Staff Writer