Home » No More than Two Cups of Milk per Day for Kids, Researchers Say 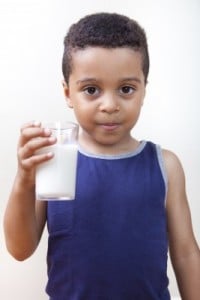 In recent studies, vitamin D has been linked to a reduction in respiratory problems for kids and iron deficiency has been linked to poor neurological development. Many children get these important nutrients from cow’s milk. But could an excess of milk prove to be too much of a good thing? Researchers from St. Michael’s Hospital in Toronto, Ontario say, “Yes!”

“We started to research the question because professional recommendations around milk intake were unclear and doctors and parents were seeking answers,” Dr. Jonathon Maguire, a pediatrician at St. Michael’s Hospital and the study’s leading researcher said in the Pediatrics medical journal. “Vitamin D deficiency in children has been linked to bone health issues and iron deficiency has been linked to anemia and delays in cognitive development. Being able to answer parent’s questions about healthy cow’s milk intake is important to avoiding these potentially serious complications of low vitamin D and iron stores.”

Maguire and his colleagues attempted to answer that question by enrolling 1,300 healthy children between the ages of 2 and 5 in a study that relied on the help of TARGEt Kids!, a collaboration effort between the children’s pediatrician and scientists from St. Michael’s Hospital and the Hospital for Sick Children.

Children involved in the study made standard visits to their pediatricians between 2008 and 2010. Parents were also asked to complete comprehensive surveys in which they answered questions about their kids’ milk drinking habits and other factors that can impact iron and vitamin D storage. Children also gave blood samples so that their iron and vitamin D stores could be analyzed in the lab.

After looking at all of the data, researchers found higher vitamin D stores in children who drank more than two glasses of cow’s milk a day. Unfortunately, these same children were also found to have lower levels of iron.

“We saw that two cups of cow’s milk per day was enough to maintain adequate vitamin D levels for most children, while also maintaining iron stores,” Maguire said. “With additional cow’s milk, there was a further reduction in iron stores without greater benefit from vitamin D.”

Researchers also noted that children with darker pigmentation may fall short in vitamin D levels during the winter months. Rather than drink more cow’s milk, Maguire suggested that these children should take vitamin D supplements during the winter to ensure they’re getting enough vitamin D without sacrificing their iron stores.