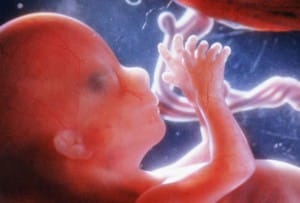 For years, the only method of determining a fetus’s genome (complete hereditary information) was through an invasive procedure: an amniocentesis. This procedure is done by tapping into the amniotic sac of the infant, which can pose risks to the unborn fetus, including miscarriage. But changes in DNA/RNA testing could be on the horizon, thanks to some recent laboratory studies.

Scientists have known for quite some time that the plasma of a pregnant woman contains the cell-free DNA of her developing fetus. It appears shortly after conception, increases as gestation progresses and then vanishes shortly after birth. There is no explanation for this phenomenon, and until recently, researchers had no way of using the cell-free DNA to determine the fetus’s genome makeup. Not too long ago, all that started to change.

Initially, research labs focused on using maternal blood tests to find major aberrations in the fetus’s genetic makeup, one example being Down syndrome where researchers would look for any signs of three copies of chromosome 21. Considered much safer than the amniotic testing procedures, these tests have shown very promising results and are making their way into obstetric clinics. The most recent study, however, takes an even closer look at the genetic composition. Jacob Kitzman, National Science Foundation Graduate Research Fellow explains:

“The improved resolution is like going from being able to see that two books are stuck together to being able to notice one word misspelled on a page.”

Published in the June 6th issue of Science Translational Medicine, a journal of the American Association for the Advancement of Science, a recent study attempted to use maternal blood samples and paternal saliva specimens to obtain enough information for infant DNA mapping. Initially, this was done for a couple at 18 weeks of pregnancy, and again for a different couple that was closer to their expectant date.

Before Kitzman and his colleagues could actually use this data to develop the mapping, however, there were several obstacles that they had to overcome – the biggest being separating maternal DNA and fetal DNA. To overcome this particular obstacle, they used a recently developed technique which resolves the mother’s haplotypes – genetic variations residing on the same chromosome. This technique, along with the paternal DNA gave them the information they needed to map out the infant’s DNA. To test their accuracy, they compared their genetic maps to umbilical cord blood collected at birth. After comparing the two, they found that they were able to map out the genetic material inherited from each parent with an accuracy of more than 98 percent.

“It was rewarding to apply biostatistics to help solve this problem,” said Matthew Snyder, who worked with Kitzman on the study.

Unfortunately, their work is far from over. Much work must be done to improve the technique before it can be widely used. Not only can the child have genetic variations that come from neither parent, but the tests, as they stand are extremely expensive. More standardized parts of the process and more robust, scalable, overachieving protocols must also be developed.

“The capacity of genomics to generate data is outstripping our ability to interpret it in ways that are useful to physicians and patients,” said Dr. Jay Shendure, associate professor of genome sciences at the University of Washington. He is the scientist who led the study. “Although the non-invasive prediction of a fetal genome is now technically feasible, it’s interpretation – even for single-gene Mendelian (rare single-gene diseases) – will remain an enormous challenge.” However, this study is a step in the right direction. “This work opens up the possibility that we will be able to scan the whole genome of the futus for more than 3,000 single-gene disorders through a single, non-invasive test.”