As we know babies sometimes pick the most inopportune times to arrive. But thankfully for one mom, a labour and delivery nurse was on hand when her baby decided to arrive during her midday shift at Walmart. 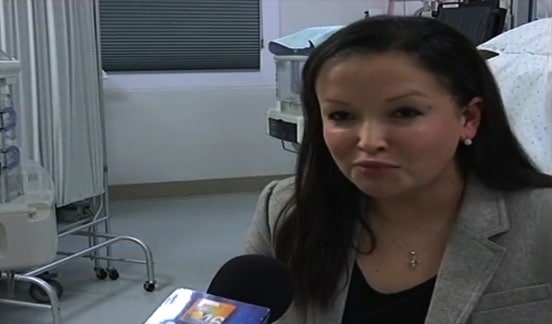 Letty Rubalcava had stopped to use the washroom before heading into her local Walmart when she heard some commotion. When she peeked her head in she saw two store employees were standing on the outside of a stall on the phone with 911, and a third was inside in distress.

Sensing they may need her help, Letty announced that she was ‘a labor and delivery nurse,’ and that’s when they opened the bathroom door and let her in.

Still in her uniform, the expectant mom was in a state of panic, saying, “What do I do? What do I do? The baby’s coming and it’s too soon!”

“I helped her off the toilet, laid her down, and got her into the correct position so I could see the presenting part,” the quick thinking nurse recalled. “I saw it was the (baby’s) head, thank God. I didn’t encourage any pushing — I just said, ‘Relax and breathe through the contractions, if you can. I’m a labor and delivery nurse and I’ve done this many times before. It’s going to be OK.’ ”

Running on ‘auto-pilot’ Letty asked the staff to bring blankets, towels, gloves and other items needed for the delivery. An obstetrician tech from Natividad Medical Center, who also happened to be in the store, assisted by finding a bulb-suction syringe, Rubalcava said.

Just 4 minutes later the baby arrived. Letty clamped and cut the umbilical cord, cleared mucus from her mouth, dried her off, and laid her skin-to-skin with the mother.

When she was leaving the bathroom Walmart employees praised her for help.

“One of the employees who had been standing there the whole time said, ‘Oh, my goodness, you’re an angel,’ ” Rubalcava told the Monterey Herald. “Then some of the employees clapped. And that’s when it kind of hit me — oh, my gosh, I just delivered a baby in the Wal-Mart bathroom — and I started shaking.”

Karina Rusk, public information officer at Salinas Valley Memorial Hospital, estimates that Letty has assisted with the deliveries of at least 500 babies during her 10 years with them. Clearly, she is the person you want by your side when your baby decides to arrive a little early.

Mom and baby were transferred to the hospital where the their condition has not been released.