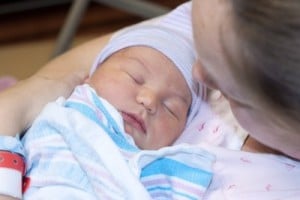 While countless studies have documented the benefits of breastfeeding for both mother and baby, the breastfeeding rates in most of America are still rather low when compared to many other countries around the world. A voluntary initiative for hospitals, Latch On NYC, backed and encouraged by Mayor Bloomberg is encouraging NYC hopes to change all of that, but the effort is creating quite a stir.

Under the city’s Health Department campaign, Latch On NYC, 27 out of the city’s 40 hospitals have already agreed to stop giving away formula bags to new mothers. Formula-branded medical swag, like mugs and lanyards used by staff, will be discarded. Additionally, all formula will be locked in a cabinet, making it only accessible to nurses. A medical reason must be given for each bottle administered, and it must be tracked using a logging book.

“They key to getting more moms to breastfeed is making the formula less accessible,” state Lisa Paladine of Staten Island University Hospital. “This way, the RN has to sign out the formula like any other medication. The nurse’s aide can’t just go grab another bottle.”

Mothers that ask for bottles will be coached and educated on the benefits of breastfeeding. While she won’t be denied the use of formula, she will have to deal with the education and coaching when each bottle is requested.

“It’s the patient’s choice,” state Allison Walsh, of Beth Israel Medical Center. “But it’s our job to educate them on the best option.”

The goal is to try and encourage more women to breastfeed, but is the new initiative taking things too far? Some formula feeding moms believe so.

“If they put pressure on me, I would get annoyed,” stated Lynn Sidnam, a Staten Island mom who formula-fed both of her girls, 4 and 9. “It’s for me to choose.”

“They make formula for a reason, and the FDA makes sure it’s safe,” stated Roxanne Schmidt, who formula-fed both of her 14-month-old twins. “Locking it up is just wrong.”

Breastfeeding advocates, of course, support the movement, especially since the breastfeeding rates in NYC are already starting to increase where the Latch On NYC program has already been initiated.

Eileen DiFrisco, of NYU Langone Medical Center, where, under the new guidelines, breastfeeding rates have soared from 39 percent to 68 percent, says, “New York City is definitely ahead of the curve.”