In our years writing about ridiculous parenting events, we have covered many parents who have left their kids unattended in the car.  Often they will say that they forgot they had the baby with them or that they just ran in a store quickly.  On Saturday, however, a New Zealand mom purposefully left her sleeping baby in the car with a note attached that said ‘My mum’s in doing the shopping, call her if I need anything’, and it had the cellphone number. 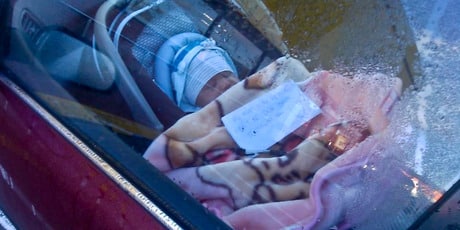 The man who spotted the baby on Saturday in the parking lot of the Porirua Pak’nSave supermarket when he and his family parked in the neighbouring space said he was shocked to see the hand-written note sitting on the child’s blanket.

“It was written from the baby’s perspective,” he told the New Zealand Herald.

“We waited there for a little bit, wondering if the mum was just going to be two seconds and come back. And my wife said, ‘I’m not going in without someone being here with the baby’.”

Eventually two other shoppers waited by the car, after they called the mother and told her to come outside.

The mom in this case will not be charged because the incident had not been reported to police and no one had come forward with information national police spokeswoman Annie Coughlan told the Herald.

“We would launch an investigation if we could but at this stage no one’s come forward,” she said.

Senior Sergeant Justin Rakena of Porirua police said that if a formal complaint was made it was unlikely to result in criminal charges against the mother.

He said it was dangerous for parents to leave their children in the car, although in many cases there was an “innocent” explanation, and the best solution was support for the parents from Child, Youth and Family.

“[Incidences like this] need to be taken on their merits and often it’s a mum that’s run into a shop, for example, and is only away for five minutes,” Mr Rakena said.

“Absolutely [it should be reported to police], but it doesn’t mean to say we’d prosecute. I would suggest the majority of people in that situation aren’t prosecuted.”

Clearly this mom thought she was being funny leaving the note with the baby and likely didn’t think she was doing anything wrong. Because charges weren’t filed and she isn’t being held accountable she’ll probably do it again.