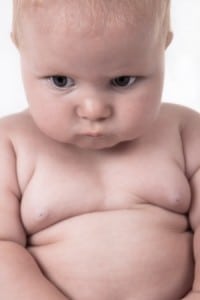 In the war against obesity, the primary focus has been children. There are many reasons for this, including the fact that children are now being faced with the same conditions as adults at very early ages. But the biggest hope is that, by reaching out to young people, we can change their futures.

“You can change your fate by things that you do early in life,” with more exercise and eating a healthy diet, Dr. Stephen Daniels, a University of Colorado pediatrician and a spokesman for the American Heart Association, told Associated Press. “Once it occurs, obesity is really hard to treat. So the idea is we should really work hard to prevent it.”

Everyone seems to be doing their part…School lunch programs have scaled back on the calorie content of their meals, and some have removed things like soft drinks and high calories snacks from their vending machines. First Lady Michelle Obama has been an almost constant presence in the lives of parents and children, initiating many efforts to help stop obesity in children. Sesame Street characters will soon be featured in the produce aisles to help promote healthier eating. But are we focusing on the right age groups? An Emory University study suggests we might not be.

“A lot of the risk of obesity seems to be set, to some extent, really early in life,” Solveig Cunningham, a scientist at the university, told Associated Press.

We didn’t really know much about when this “set risk” happened, when that window of opportunity was open. The Emory study seems to suggest that it may be crucial for us to focus on children before they even hit kindergarten.

Although they watched all of the children in the study, the researchers carefully watched the 6,807 children who were not considered obese when the study started. Overall, nearly 12 percent of those children ended up developing obesity – 10 percent of girls and nearly 14 percent of boys.

In all groups, children that were born at a higher birth weight (9 pounds or more) were more likely to develop obesity later in life. In fact, about 36 percent of the children that eventually became obese were born on the large side.

Income also played a role in obesity risk, with children in the highest income bracket the least likely to become obese. The highest risk was for children who lived in the next-to-the-lowest income bracket, just above the poverty rate, or your middle-income families.

All this means that we have some new information that may help us shift our focus. By doing so, we may be able to help more children and families fight against obesity. What’s more, it’s possible that some of this information (such as middle income families being in the highest obesity bracket) could help to change things inside the government, and maybe even grocery stores. But what this study also tells us is that it’s never too early for a parent to address concerns over their child’s weight.

Those that are growing faster than their peers (determined with a growth chart) on a regular basis are at the highest risk for obesity. Parents should talk with their child’s pediatrician about healthy eating and exercise options if their child is falling in the 85th percentile or higher. Parents should also keep in mind that “diets” should not be used for young children, unless being initiated and monitored by a physician.