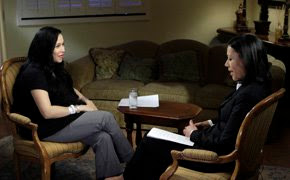 Octuplet Mom, Nadya Suleman, sits down with NBC’s Ann Curry for her first TV interview since she gave birth to her 8 babies last Monday.

The soon-to-be busy mom admits that she has always longed for a big family as an only child.

“That was always a dream of mine, to have a large family, a huge family, and — I just longed for certain connections and attachments with another person that I really lacked, I believe, growing up,” Nadya said during the interview.

“I didn’t feel as though, when I was a child, I had much control of my environment,” she told Curry. “I felt powerless. And that gave me a sense of predictability. Reflecting back on my childhood, I know it wasn’t functional. It was pretty dysfunctional, and whose isn’t?”

Suleman’s mother, Angela Suleman, had told Usmagazine.com exclusively that her daughter did blame her childhood on her desire to have so many kids.

In the interview, Suleman — who already had six children before giving birth to the octuplets — confirmed that the same donor, a friend, was used for all 14 kids and that all of the children were conceived through in vitro fertilization.

I can’t help but think that this interview is a publicity stunt devised by Nadya’s new publicist to drum up support so that she can change her public image and possibly get some corporate sponsorship.

A first look at the exclusive interview will air on NBC’s Today Friday.