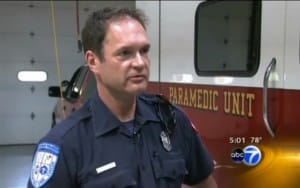 Addison firefighter/paramedic Jay Arnier never thought that he would be using his Infant CPR skills just a week after receiving the training and that too on an occasion when he was off duty and out fishing. But it was exactly his professional training that saved the life of a baby floating in the Fox River on Tuesday.

Jay recalls that he had spent the morning fishing in the river with a friend when at around 1.00 p.m. they noticed a woman crying and running out from her house into the water.

“She was frantic; screaming and running right toward the river… and she just ran right into the river,” he said. 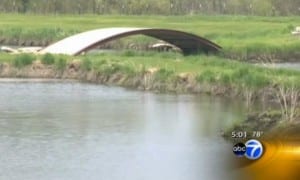 Jay immediately drew his attention to the object in the water that was floating. He quickly understood that it was a child the woman had picked in the water and wasting no time took the boat ashore and rushed to the woman. She was holding the lifeless child in one hand and a cell phone in the other.

“I held the baby in an inverted position and did some small chest compressions with my two fingers and water came out of her mouth,” said Arnier. “She was pretty much lifeless; just laying there limp.”

He remembered the thermometer in his boat had indicated the temperature of the water to be 60 degrees. The child was cold and blue and was not breathing, therefore he breathed for her.

Initially the baby girl did not respond, but after a while she coughed and slowly her coughing increased. She also inhaled on her own.

“I heard the cough a little stronger, and she actually inhaled on her own. That was a good sign,” said Arnier.

Slowly the girl began to mover her arms. By the time the Sherrif’s deputies arrived and took her to the Northern Illinois Medical Center in McHenry where she is said to be fine.

The mother said later that she had been at home with her three children when she went upstairs briefly. When she came back she found that the siblings had gone outside and were sitting near the water. The baby girl was in the water.

For Jay it was a first time experience to save a life off duty. He also found it odd to be in such an emergency situation without any emergency equipment.

“You feel kind of naked out there doing your thing,” he said.

He also feels that it was just part of his job and he is not a hero.

“The accolades that come with it afterward are really overwhelming.  It’s what I do, and I was glad I was there to do it.”