Two year old Haylee McDonald and her family will always be grateful to Const. Aaron Jabs for saving the little girl’s life. The toddler was stuck upside down in her family car when her mom accidentally lost control and toppled in a watery hole in Delta. 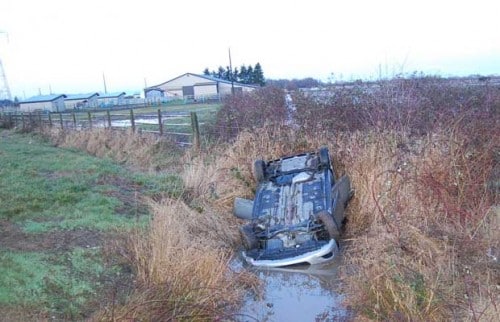 Alyse McDonald, 25 from Surrey, B.C., was driving along Highway 17 on her way to work at a daycare on Wednesday around 7.00 am. She had Haylee and her 6 year old son Jordan, 6, in the car when she suddenly saw two ducks crossing the road.

“I saw two ducks crossing the road . . . and I tried to swerve to get out of the way,” she recalled. “The last thing I knew I was in a ditch upside down in my car.”

Alyse believes she might have lost consciousness soon after the fall as she felt disoriented.

The three of them were trapped in the car with little Haylee wailing as her seat was upside down.

As Jordan explained, “My sister was freaking out a lot.”

Alyse’s phone had fallen into the water pooling inside the car which left her without any way to call for help.

The mother tried to get the door open but could not.  When Jordan was able to wriggle out of the wreckage Alyse asked him to go to the main road and ask for help.

As Jordan waved for help, Alyse also managed to get out.

“I knew she (Haylee) was in there,” she recalled of her dazed state. “I was just too out of it to know what to do about it.”

It was right at this moment that off duty RCMP Const. Aaron Jabs showed up. He was driving on the highway with his wife when they notice the wet little boy calling for help. When Jordan told them about their accident, Aaron went to help Alyse.

His wife soon joined and helped rescue Haylee using the flashlight from their cellphone.

Aaron called 911 and took McDonald and her kids into his vehicle to warm up before they were transported to the hospital.

It was only on Thursday when the family was safe and sound that Alyse contacted Aaron to thank him and realised for the first time that he was a mountie.

“He’s just an amazing person,” she said McDonald, “I’m very grateful to him and his wife.”

Aaron said he did what any off-duty officer would do in such a situation.

“I did what any off-duty RCMP officer would do in the same situation,” he said. “I made sure they all got out of the car as quickly as possible, called 911 and then kept them all safe until emergency crews could arrive.”