It’s never okay to leave a child (or pet) in the car alone, but with the temperatures rising outside.  Even just a few minutes can be deadly. That risk is exactly why two Camden County police officers went as far as to smash a car window to rescue a baby left locked in a car.

According to authorities, and as reported by USA Today, a woman had approached Officer Belinda Villegas-Ramos. The woman told Officer Villegas-Ramos that a baby was locked in a car in the parking lot of a CVS Pharmacy adjacent to where the on-duty officer had been stationed. 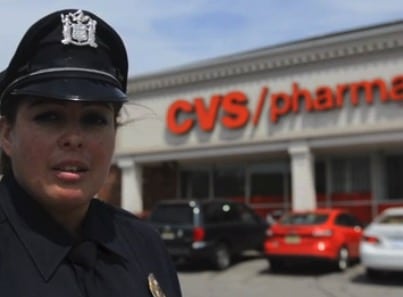 On her way to the car, the officer called the situation to police headquarters and then, upon arrival, attempted to break the driver’s side window with her flashlight.

“I just thought about getting that baby out of the vehicle and getting him to a safe area,” Villegas-Ramos told USA Today.”

The officer had only been able to make spiderweb cracks in the window, but then Officer Joseph McGrath arrived on the scene. He used his nightstick and managed to shatter the glass into pieces.

“I guess I hit the right spot,” he said after the rescue.

Once the window had been broken, Villegas-Ramos scooped the baby up, rushed him into the air-conditioned bank, and partially undressed the baby to cool him down. Shortly after, an ambulance arrived and transported him to a nearby hospital.

The mother came out of the CVS shortly after the baby had been rescued. She told officers that she had only gone into CVS for “two seconds.” But Officer McGrath said the rescue efforts had taken several minutes.

“She was mad about the window being broken,” McGrath said.

Child welfare was notified about the incident, and the mother was taken into custody on charges of child endangerment. Yet, interestingly enough, Officer Villegas-Ramos still sounded optimistic that the 30-year-old mother would “learn from” the experience.

“This was a poor judgment call on her part,” Villegas-Ramos said. “She’s going to need some kind of help.”