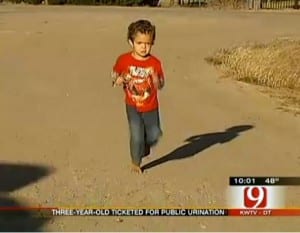 Officials in Piedmont Oklahoma have come under scrutiny after a three-year-old boy was fined $2500 for attempting to pee on his front lawn.

Dillan Warden was playing outside when nature called.  With no facilities near by, he did what many little boys do and pulled down his pants to go outside.  Before he could even start a police officer pulled up and ticketed his mom.

“Dillan pulled down his pants to pee outside. I guess and the cop pulled up and asked for my license and told me he was going to give me a ticket for public urination.”

Also present during the incident was Dillan’s grandmother, Jennifer Warden.

“I said really, he is 3 years old, and he said it doesn’t matter. [He said] It is public urination. I said we are on our property and he said it’s in public view.” 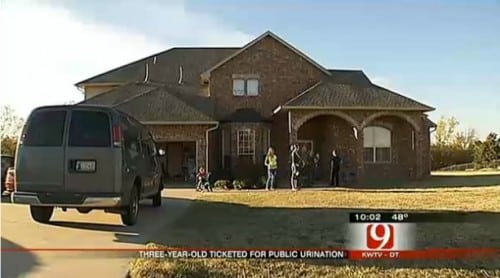 The family lives on two-and-a-half acres and says their neighborhood is actually quite rural.  The officer, however, parks at the end of their street daily. So they asked why.

“It’s a public street and he wants to, so he can,” Jennifer Warden said.

Initially the Wardens filed a complaint with the police department but they didn’t accept it.   After the story gained National attention the police chief stated that the officer could have handled the situation a little better and promised the ticket would be thrown out.